By Scooter through Germany in 1965

Our friend Paul Hart from the "Veteran Vespa Club" sent us a story that is so beautiful and nostalgic that we have to share it with you. In 1965 the Swede Erik Anestad made a tour through Germany with two friends on a Vespa and a Lambretta.

Paul writes: "Spending too much time on Flickr looking at photos of old scooters, I came across this excellent album taken by Erik Anestad during his trip from home in Sweden to Germany and back again. Below is an English translation of a letter he sent home to his parents while on the trip. Thanks so much to Erik Anestad for allowing me to share this!"

Text and photos by Erik Anestad

I had been given an internship at a ship forwarding company in Hamburg for the summer of 1965. I had also received a scholarship from the Swedish Board of Trade to finance the whole thing. My best friend from Hedemora high school, Per Forsling, had at the same time got an internship with a forest company in Austria. We decided to go together on our scooters down through Germany. Our mutual best friend, Ingemar Melin, wanted to come along and so the three of us rode on our two scooters. We started together from Norberg in early June. After a while, when we had parted, I wrote the following letter to mom and dad. When Gärd and I cleaned up mother's house when she moved to the elderly home, we found this letter in the secretaire where she had saved it for all the years.

This is what I wrote:

“It is said that when someone makes a trip, he can tell a story and since it has now been a few days since I left, there is a lot to tell. I am about 20 kilometers outside Göttingen on my way to Goslar. The place I sit in is a rotten old village pub and around me the village old guys sit and play cards and drink beer. In addition, they speak an incomprehensible language, but I'll take everything from the beginning.

Everything went well on our way to Olle [my brother] but of course I was my usual self, so when we checked the air at OK in Fagersta my camera bag with my traveler’s checks were left standing there. When we came to Stjärnvik I discovered it all and immediately called OK. Sure, the bag and the checks were left but still there, so it was just to turn around and pick them up. Then I moved the checks so that I always carry them on me. In the evening Olle served meat fondue and we had a nice time. We started at 8.30 am on Tuesday and everything went well until we got to Ljungby where things started to happen: We saw a dead guy in the ditch but we couldn't do anything about it so we contacted the police and continued the journey. Shortly afterwards Pers's scooter started to make a big racket and then it stopped, and so did we. At first, we thought something had happened to the piston, but we soon found out that it was the fan wheel that was scraping against the protective cover. After much jostling we got the cover off and could knock it out so that the fan did not touch, but why the fan suddenly touched the cover none of us could understand.

When we were past Markaryd we discovered that it was high time to buy food for the evening and that is why we drove like a bat out of hell to Höör where we arrived just before 6 o'clock. We then found out that the store had closed at 5.30 pm but there were still people in the store so we could buy some food. Finding Eje’s and Kaj's [my cousins] apartment in Trelleborg was not difficult with the help of the map and there I made an omelet and meatballs and fresh potatoes.

The ferry trip to Travemünde went well, but when we were starting out in the morning my back tire was flat. Thus, I changed tire in Travemünde. When we were going to head towards Goslar it had started to rain and we were quite late and so we jumped on the Autobahn towards Göttingen. In this way, we earned time by driving on the Autobahn. Some 20-30 miles south of Goslar on our way to Fulda we found a Gasthaus. As we sat and ate, a drunken old man came up to us and sat down and started talking incomprehensibly but the more we talked to him, the more clearly he talked and then you could understand what he was saying. During the evening it thus became clear that he had been a soldier for 16 years from 1929 to 1945, was in a prisoner-of-war camp in Russia but what he was living on now we never understood. He bought us beers and then a cherry liqueur (or schnapps) which we understood first the following morning when we paid the bill, but we left money for two beers for him, so we hope he got them the next evening. That day the journey went painful, our rear ends were hurting, but we drove to Rothenburg where we looked at the city. (I forgot to mention that when we were traveling on the Autobahn, it started to rain so damn hard that we stopped under a bridge where we sat for about half an hour during which time there had apparently been an accident on the other side, because when we sat there, police cars, tow trucks, and an ambulance came. When we drove off, we saw a truck that was lying upside down and in the wrong direction and under it a small, former car. But we then looked at Rothenburg for about an hour and a half and then continued towards Nürnberg.

When we refueled in Ausbach, they said that it had been raining for three days and that the roads to Austria were flooded. When we talked about not getting a drop of rain on us recently, they didn't believe us. When we had gone for about 10 minutes it started to rain like hell. We then stopped at an Aral gas station but before I could stop, my Vespa did. Then it would not start again, and I feared that the ignition coil had become damp but at least I got to spark on the plug, but it would not start again. We then asked at the gas station where we could stay overnight, and they told us where to go. While I was unpacking my things, they called a Gasthaus and asked if there was any room for us, which there was. Then one of the guys drove me while Per and Ingemar followed us on Pelle's scooter, which stopped on the road too. But it was downhill all the way so there was no problem getting to the inn. Very wet and grateful we were able to install ourselves at a very clean, neat, and nice Gasthaus where we ate food in the evening and drank beer and become very soused. Here in southern Germany the beer is tastier and served in bigger glasses than in northern Germany, but that beer was also very good and cheap, at least I think when it costs 1 DM for 25 cl.

This morning, both scooters started very nicely and obediently, and the failure to do so yesterday was due to excessive humidity. The hydrometer indicated over 100%, but we were on dry land anyway. Thus, we parted in Heilsbronn and Per and Ingemar continued down towards Austria while I headed back towards Hamburg. From Würzburg I took a wonderfully beautiful road towards Vogelsberg, high mountains and deep valleys. Then continued the journey towards Kassel (with women - [family joke]), but I found an entrance to the Autobahn and took it up to Hanover to escape the women and gained some time. Happily, I continued with a leaking tire and a puncture on the spare. I found a company that sold scooter parts, but they had no tube that fit, but referred me to the largest tire company in Göttingen but they also had no tube but referred me to a company that was on the road to Hanover. Thus, I headed towards Kassel, but discovered my mistaken direction and wound back through the entire city towards Hanover instead, where I eventually found a company that had closed for the day, but one employee was still there and could help so I got a new tube. Stupid as I am, I did not change the tube right there, but continued to try to find a Gasthaus on the way to Goslar because the air did not leak so quickly. The only answer I got everywhere was " alles besetzt" [we are full] but in the end there was no air left and no gas station nearby. I changed the tube and had to hitch-hike to the next gas station to fill the air and then back, but it went well. Then on to look for a room for the night at eight o’clock was not easy, but in the end, I found one. The main thing was that I got a roof over my head. As I write this, I have eaten dinner, have as usual consumed three glasses of beer and I have also come to realize that the quality of a room and food is different, but the price is quite similar, but it is surprisingly difficult to judge the rooms from the outside and sometimes you have to take where you get.

Tomorrow I will travel to Goslar and then to Hamburg which should go well if there is no trouble with the Vespa which has run perfectly well apart from the aforementioned problems which were not mechanically related. I have now traveled over 1,100 miles and my butt is quite sore, so the breaks are taken more often, and I sleep deeper and deeper. I understand if you have had a lot of trouble interpreting my writing but in this way the letter will last longer, but it was also very long anyway [seven handwritten pages] and now you know more what happened during my trip.

Could you please send a copy of my grades so I can see them. It is now after 10 o’clock and it is time to go to bed.

Per and I had agreed to meet in Friedrichshafen on the Bodensee after we finished our internships. The night before I was going to leave Hamburg my colleagues at the firm took me out for some fun at an amusement park, where I managed to lose the key to the scooter. I did not notice this until the next morning. After considerable problems I finally found a locksmith who could drill up the lock and I could be on my way. After a “forced” ride down south Per and I met at the right place at the right time. We then continued up north to Kiel, where we boarded a ship together with our scooters, and the ship took us tut o Västerås in Lake Mälaren. There is no letter from that part, but one incident is still in my mind:

We usually took smaller roads to avoid the fast traffic on the Autobahn, and at one place we drove full speed (70-75 kph) through a small village and were stopped by a policeman for speeding. We told him that we did not see any speed signs, and he explained to us how the signage worked. In the end he fined us DM 3.50 for “Geschwindigkeitsübertretung” which is German for speeding. I had that ticket for a long time, but it is now lost. Sad. 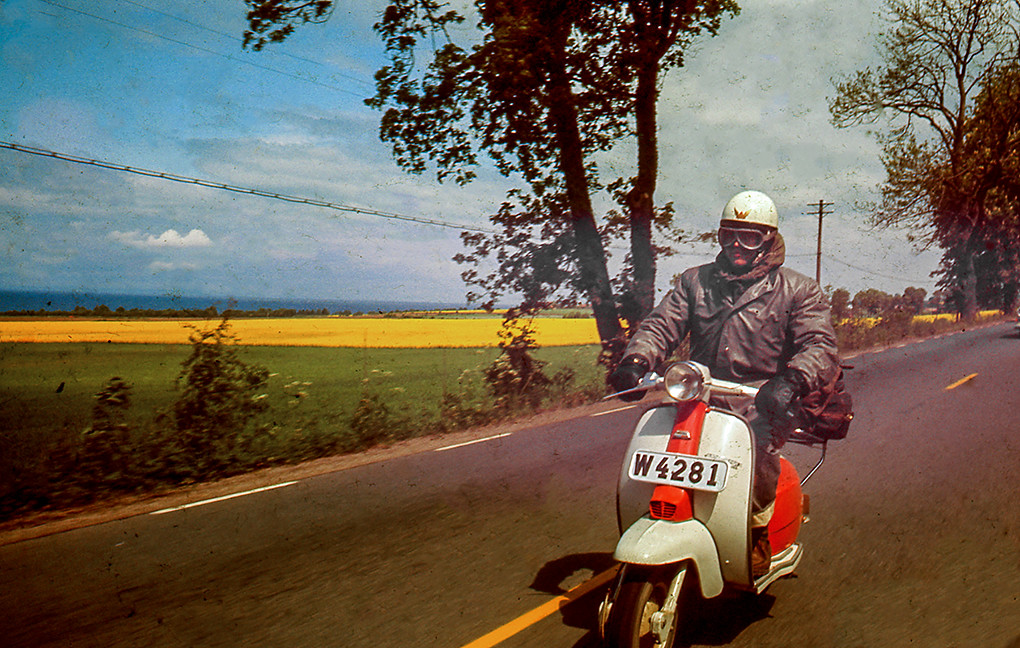