For two long years, we were forced to cancel our traditional and popular "Open Day" at SIP Scootershop due to the general conditions of the pandemic. We kept a close eye on developments at the beginning of this year and when it became clear that events would be feasible again, the anticipation was enormous. On 28 May, the time finally came: SIP Open Day 2022.

Not only was the sun shining from 10 a.m. onwards, but so were the faces of the 2,000 or so visitors who trickled in from near and far that day. They came by Vespa or Lambretta, by motorhome or motorbike, in a pickup truck or even on foot. They came from all over Germany as well as from Austria, Italy, France and Switzerland. They were men and women, young and old; tuners, screwers, scooter boys, racers and Sunday riders who finally wanted to see their scooter friends again, whom they had sorely missed during the years of lack. And we at SIP Scootershop were damn happy to be able to offer a worthy setting for it. The SIP Scootershop team around showrunner Christian put a lot of effort into the preparation and organised a perfect day.

Steffi, Mascha and Stephan guided the guests through the hallowed halls of SIP and gave them a glimpse behind the scenes. In the flagship store, Olli, Nico and Fabi were available for expert advice, while Max and Angelo were in charge of the open-air parts sales. Jesco worked as a field reporter or supervised the test stand together with André. In our finally tidy workshop, Robert presented the SIP custom scooters. DJ Leo Ernst provided the right soundtrack and the crew from the Siperia supplied the Vespa fans with cold drinks and original Italian pizza, paninis and salsiccia.

Meanwhile, SIP Scootershop captains Alex and Ralf welcomed many old friends and new guests: the "Vespa Club München" was there with a stand, as usual, and President Hans Appel was a happy man: "Ralf and Alex from SIP Scootershop I'm sure I've known for 16 or 17 years, we met back then at the Euro Vespa at Lake Wörthersee. Since then we have always been in contact. It's really important to meet again here at the Open Day. That you finally have contact with all the Vespa maniacs again."

At the VMC stand, the Italians from Vicenza Giustino, Andrea and Stefano were on hand to answer questions and patiently explain everything about their exhaust systems, racing cylinders and pistons. "We have been on the market for 15 years and are glad to be here at the Open Day to show our new parts. We are happy about the close cooperation with Robert and Jesco at SIP Scootershop. Finally we can promote our products beyond the Italian market," said VMC boss Giustino.

Piergiorgio Bettella, CEO of the Italian tuning company Pinasco, was a very old friend at the Open Day: "I know Moritz and Alex in particular very well, after all we have been cooperating for 25 years. The Open Day is the perfect opportunity to see each other again." Also from Italy was Fabrizio "Cao" Caoduro, who has brought a very special style to the scooter scene with his "70s Helmets". For SIP Scootershop, he refined the Vespa GTS Pordoi and the "Something Special" racer with his typical metal flake design. More scooters in 70s design were on display at the Open Day. Cao was in high spirits: "The Open Day is something very special for me, because Ralf and Alex have practically been part of my family since they walked into my workshop in the mid-90s. I have witnessed all phases of SIP Scootershop." And, last but not least, the guys from EGIG Performance from South Tyrol showed tuning parts of the extra class at their own stand. "We've been waiting for this Open Day for so long and now it's finally here. The weather is awesome, lots of people are there - just super! Finally normal people!", rejoiced mastermind Erich Oberpertinger and summed up his lifestyle in a few words: "Riding a Vespa is an attitude to life. It is freedom. You sit on your scooter and just enjoy it. But for me, wrenching is just as important. I switch off when I'm doing it. I go to the workshop early in the morning and suddenly it's six o'clock in the evening. If the girlfriend didn't slow me down, I'd probably be at work until late at night. My hobby is my job, but that has advantages and disadvantages, because sometimes I might do too much. That's the catch. But it's better that way than being annoyed with the office every day. If you love doing it, it comes off easier." This passion is also evident in his parts and Erich was still to make a name for himself that day. But more about that later ...

The future of the Vespa?

It was rattling and smoking all over the place at the Open Day, but the place at the guys from MEM Motors were strangely quiet. No wonder, they are perhaps working on the future of the scooter scene by offering conversion kits for Vespas: Out with the combustion engine, in with an electric drive. Company founder Florian Menzl, an enthusiastic Vespa rider and mechanic, explains: "It may not be the future of Vespas, but it's definitely a partial aspect that has its justification and will be found in cities. Our scooters have an acceleration that is a lot of fun. We're totally happy to be here and delighted with the positive feedback." He can well understand the scepticism of the hardcore scene, but he assures: "Riding a Vespa is simply a lifestyle, because the vehicles have this beautiful aesthetic and that should be preserved by our conversion kit. We love the feeling of freedom on these beautiful old tin scooters."

Chris "Foxy" Fuchs, who has been in the Vespa saddle for over 30 years and is a founding member of the German chapter of the "Vespa Cowboys", views the existence of e-scooters with the necessary composure: "E-scooters? Live and let live, I always say. Maybe that's kind of the future too, but I can only hope that the motorised two-stroke can live for a long time."

Open Day is a highlight for Foxy and his club: "We definitely missed the Open Day a lot. I walk around here and see old friends I haven't met in two years. It's really nice to get together here again. That's what counts. I've been riding scooters for over 30 years. It's good to catch up again. The whole culture around scooters is fantastic."

Showdown in the afternoon, party in the evening

There was a big crowd at the dynamometer at 2 pm when Erich from EGIG Performance pushed his Vespa 50 Smallframe with rusty patina onto the ramp. The fact that a 407 cc Zero-G cylinder and a 62 mm crankshaft from Egig Performance were slumbering beneath the supposedly harmless vintage look was not to be suspected at first glance. The replica of the legendary Dellorto 42 flat slide carburettor from DEA was also well hidden inside the frame. Only the additional tension belt with which André fixed the rear wheel of the Vespa on the test stand told the spectators that an extraordinary performance was to be expected here: After the start signal sounded, it became loud and clouds of smoke fogged the area. When Erich climbed off the dyno a few seconds later, grinning and to great applause, the screen showed a sensational 77.9 hp. And once again the wisdom proved true: "The difference between men and boys? The price of the toys."

After the sun had disappeared on the horizon, the action gradually shifted to the pubs in the Lechstadt. The scooter fans enjoyed their regained freedom to the fullest and had fun until the early hours of the morning. Those who can remember were not there and what happens in Landsberg stays in Landsberg.

We thank all friends, guests and staff for a wonderful SIP Open Day 2022. Let Ralf have the last word: "What a day! I haven't seen so many happy faces for a long time. Finally we could celebrate, talk and ride together again. The Open Day is already the highlight of the year for me." 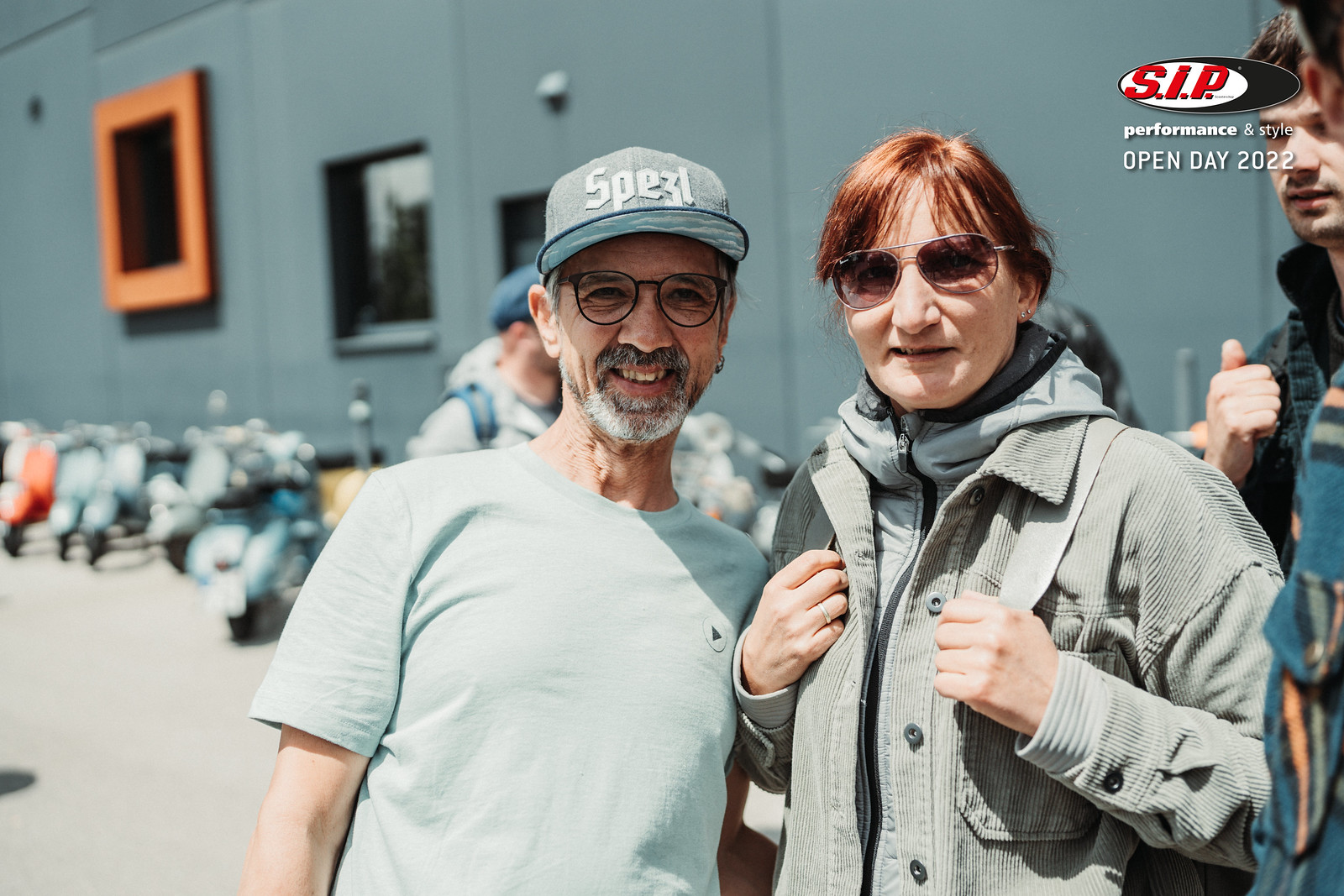 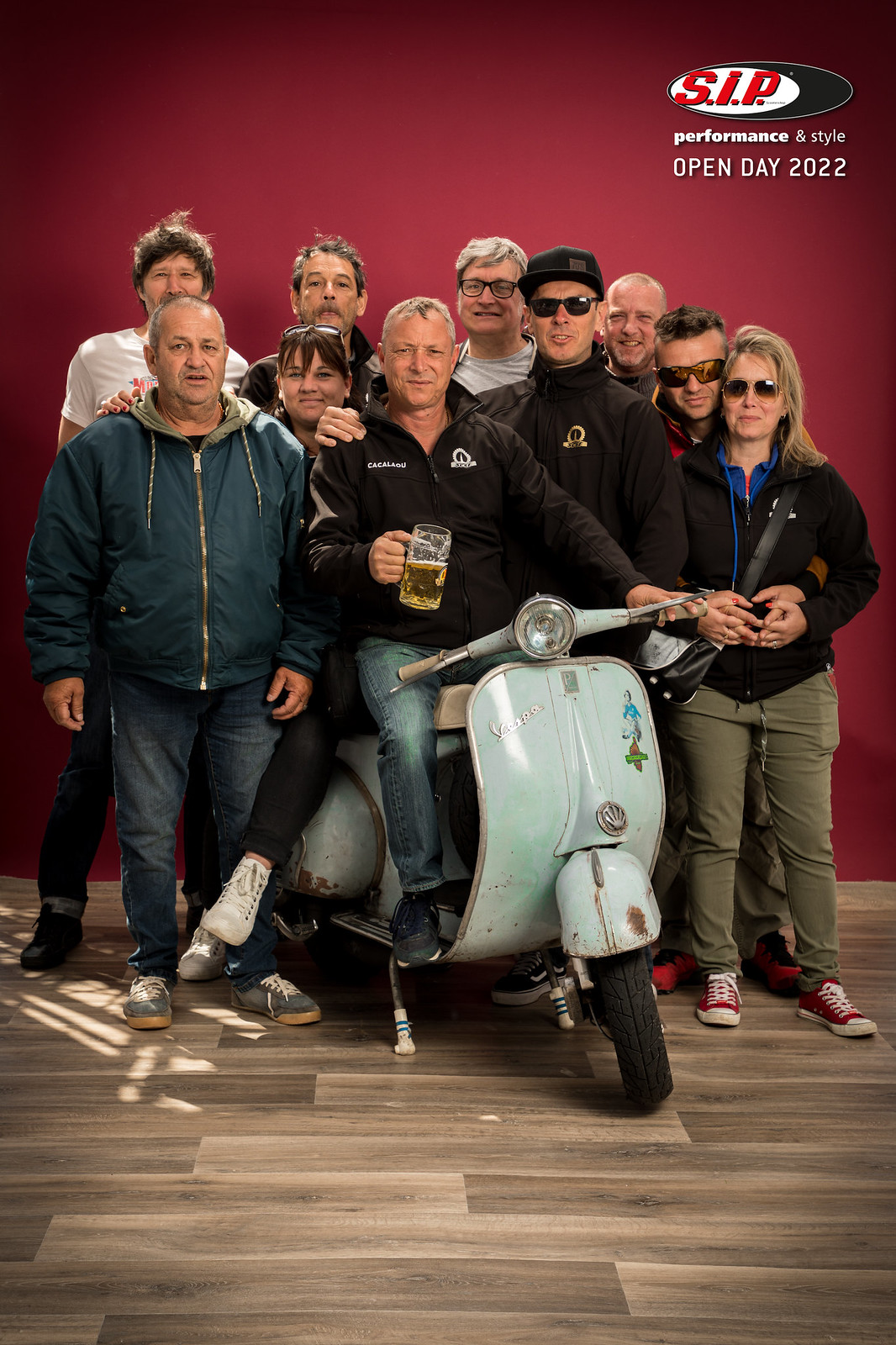