I knew immediately that it was going to be a big trip again, when my passenger buckled his 15kg baggage into the foot well at the crack of dawn, and puttered along with me, relatively relaxed, to the SIP Scooter shop in Landsberg am Lech. A total of 17 Vespa scooters of all shapes and sizes met there. From PX to VBB, Rally, SS, SS180, Sprint and even two GTS 300, we set off from there together in the direction of Corsica. First stage destination Bergamo. The weather was excellent and I enjoyed cruising with my siblings over the well developed country and pass roads. We rode up onto the Hahntennjoch at 1895m altitude, and one of my companions was given a new stator plate, with an amazing backdrop. Then it was on to Reschenpass, past Lake Reschen and its sunken church tower to Latsch, where SIP customer Egon Vent welcomed us on his Struzzo, and led us to his favourite pasta location. We waited patiently for our riders in a shady car park.

Then the air became thin, because we went bend by bend up Stelvio Pass at 2757m. The view and atmosphere were “breathtaking” for me in the most literal sense of the word. We reached Bergamo late, and were parked on a terrace in the middle of the old town, with a view of the discreetly lit little town, to sleep. The next morning we visited our supplier DMD Helmet, and our riders rummaged through the well stocked shop, before it was on to the hot and turbulent Autostrada to Milan. The sun shone from above at what felt like 200°C, and the hot asphalt simmered below. I felt like we were continually blazing towards a wide open oven, and envied my siblings with newer models their water cooling.

“Drop it like it’s hot” - My driver lost his iPhone at full speed, which slid across the road surface, and went directly under the crash barrier and landed in the field. Of course I could have caught it with my footboard, but that would have been too easy. So he had to go to the Milan Deus Shop and the KD House, a mega burger bar, with a cracked screen. Genoa was waiting for us, and after the obligatory cannonball by our riders, we were lashed under the deck of the ferry to Bastia like little calves, and sailed to the French Mediterranean island overnight. The next morning, we were welcomed directly at the ferry port by some members of the Scooter Club du Sud Est, and meandered along the winding roads together, down the beautiful west coast to arrive at the destination near Ajaccio around evening.

Two relatively relaxed days followed. Worn clutch linings were preventatively replaced, disc brakes vented and for the exhausted but happy riders, there were numerous cool downs on the nearby sandy beach. The hospitality and festive mood of the French was confirmed as usual. It seemed to me as if there was wine from their own vineyard, the world’s best Bouillabaisse, grilled fish that was personally selected from the fish market, and always happy songs alternating between the style of the French and Bavarian beer tents.

But all good things must come to an end. We were loaded up, said goodbye to our hosts and got back on the road towards the ferry port in Bastia. The eternal meandering of the tight, poorly built roads must have seriously afflicted my helmsman, because on one of the bends, a vehicle stopping abruptly became a disaster for us. My original chassis is simply not made for bumpy roads and rapid braking manoeuvres, and ultimately brought us down. My mud guard received a large dent, and the left side panel was scratched. My rider lost a piece of his tooth, suffered various grazes on his arms and legs, but got back on my seat again after a short hospital stay in Calvi. Even though the temperatures are hot, and you would prefer to drive through the neighbourhood on us naked, it is recommended to think about appropriate protective clothing here and there.

The next morning, the travelling speed was predictably slightly reduced, and after a short ferry ride to Livorno, we were driven to Massa, and met the members of the local and best organised Vespa club there. Once again there was revelry, and the songs sounded again. Grazie el Presidente, siete famosi!

The next day, after a short but eventful interim stop in Maranello and the Ferrari Museum located there, our route led to the Trattoria la Val at Garda, the hideout for the night. Our companion Zini from Stoffis Garage celebrated the arrival his birthday there, and once again the clearly successful evening was highlighted with praise songs for the jubilarian. The route home along Lake Garda and over the Brenner pass was uneventful, and of course, just before Sterzing came the rain and significantly lower temperatures. Unfortunately my clutch shaft seal gave up the ghost, and after a short diagnosis, the ADAC plus transportation was ordered. It was somewhat degrading for me and my man, not to be able to pass the town sign of Landsberg am Lech with the other companions, yet as consolation, we were chauffeured home dry and well-tempered in a Ducato.

I am a Vespa Sprint Veloce, 42 years old and therefore 5 years older than my driver. My heart is made of a PX 200, and lifted with a 210ccm MALOSSI cylinder called “SPORT”, a long stroke shaft, Venturi suction head and an SIP Road exhaust. I am visually damaged and I need open heart surgery, but I am not tired. My driver will patch me up, and I am already looking forward to speeding through European country roads, motorways and pass roads with him again.

Here you can find all our pictures of this Vespa Roadtrip: 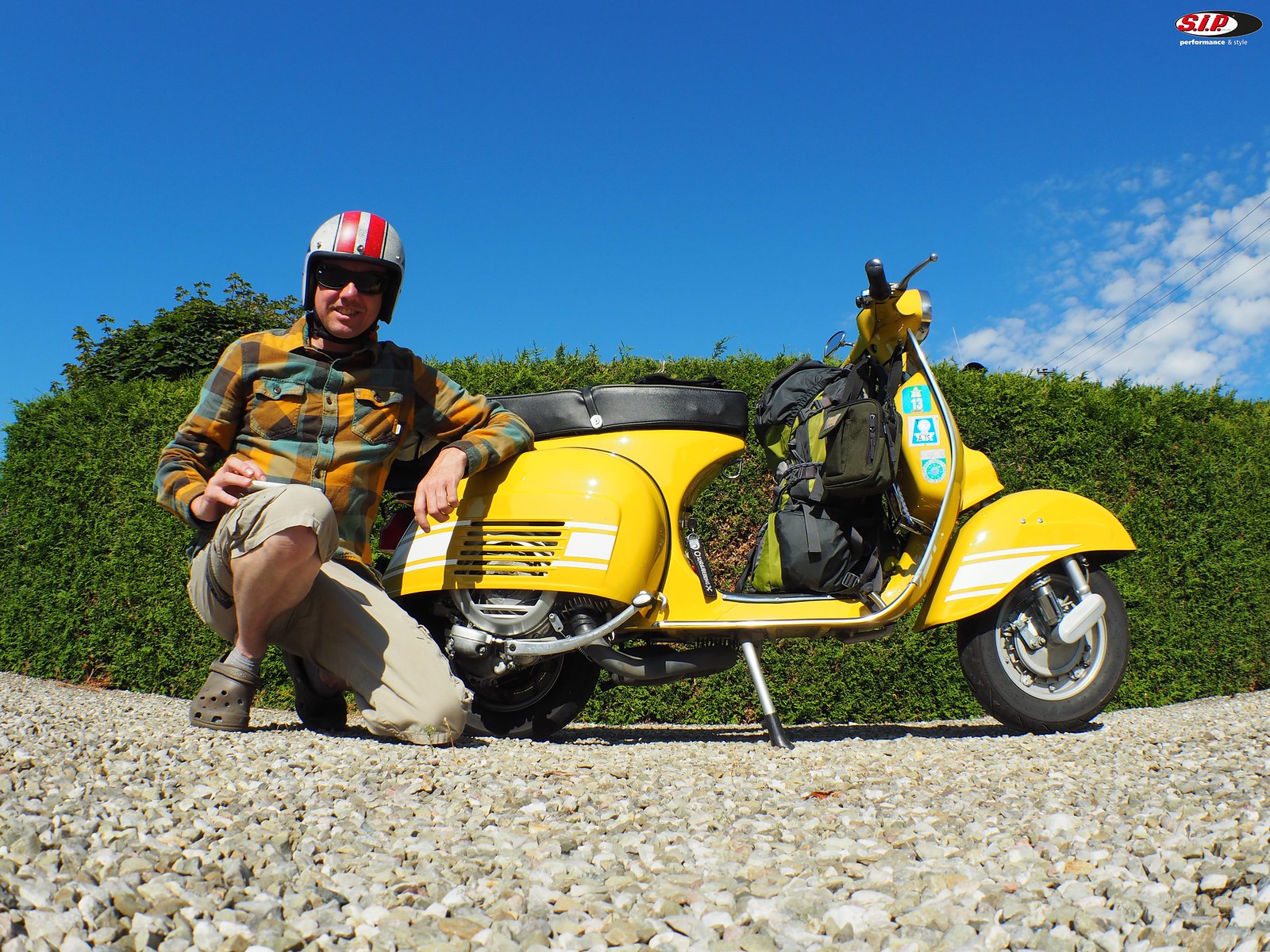 Enjoy our SIP TV Video here now! Subscribe to our YouTube channel to not miss any video any longer!