After four successful events, this wondrous event in the Mostviertel (Austria) has already become a timeless classic in scooter sport. Over 40 inspired and daring pilots, prepared special scooters at the highest technical level, fun for the audience, delicious suckling pig in the heated marquee. The prerequisites: Cold, an understanding landowner, icy roads as smooth as glass and spiky tyres with centimetre-long spikes.

Scooter riders are known to be a sociable, cheerful people. From spring to autumn, hardly a weekend goes by without meetings, parties, rallies and awards for vehicles, nighters, all-nighters and weekenders. Winter, however, is a drought. "We thought about how we could lighten up the season a bit and what scooter event could fit in," says Patrick Lenz, vice chairman and webmaster of VC Ybbstaler Rollerflotte, which was founded in 2004. "Then we thought of the annual car ice race and skijoring in Sankt Georgen. We quickly agreed with property owner Günther Tatzreiter - the first event in 2009 was already a huge success!"

The track, originally prepared for the car race, saved the 2011 scooter race: it largely withstood the spring temperatures in mid-January and could be hardened again by tractor and thousands of litres of water in the following sub-zero temperatures. According to www.ybbstaler-rollerflotte.at, the conditions for participation are largely liberal: the prerequisites are functioning brakes, a volume of less than 96 decibels, studded tyres and physical fitness, i.e. being sober and not having a hand in a cast. The approving district authority also requires that each participant bring his or her own oil drip pan.

The fact that the members of the scooter fleet like to collect Vespa veterans and are above all gearshift scooter fans is then also reflected in the vehicles of the guests: a colourful mixture of classics from all years of construction and more modern PK and PX bodies arrive in the paddock, the tuning reaches clear heights of up to 30 kW (40 hp). The classification is liberal and by no means restrictive: automatic scooters are always welcome, Lambrettas and LMLs take part anyway. The basis for participation is a certain similarity to a scooter, and there are special classifications for other vehicles such as the racing beer crate or scooters with nitrous oxide injection. 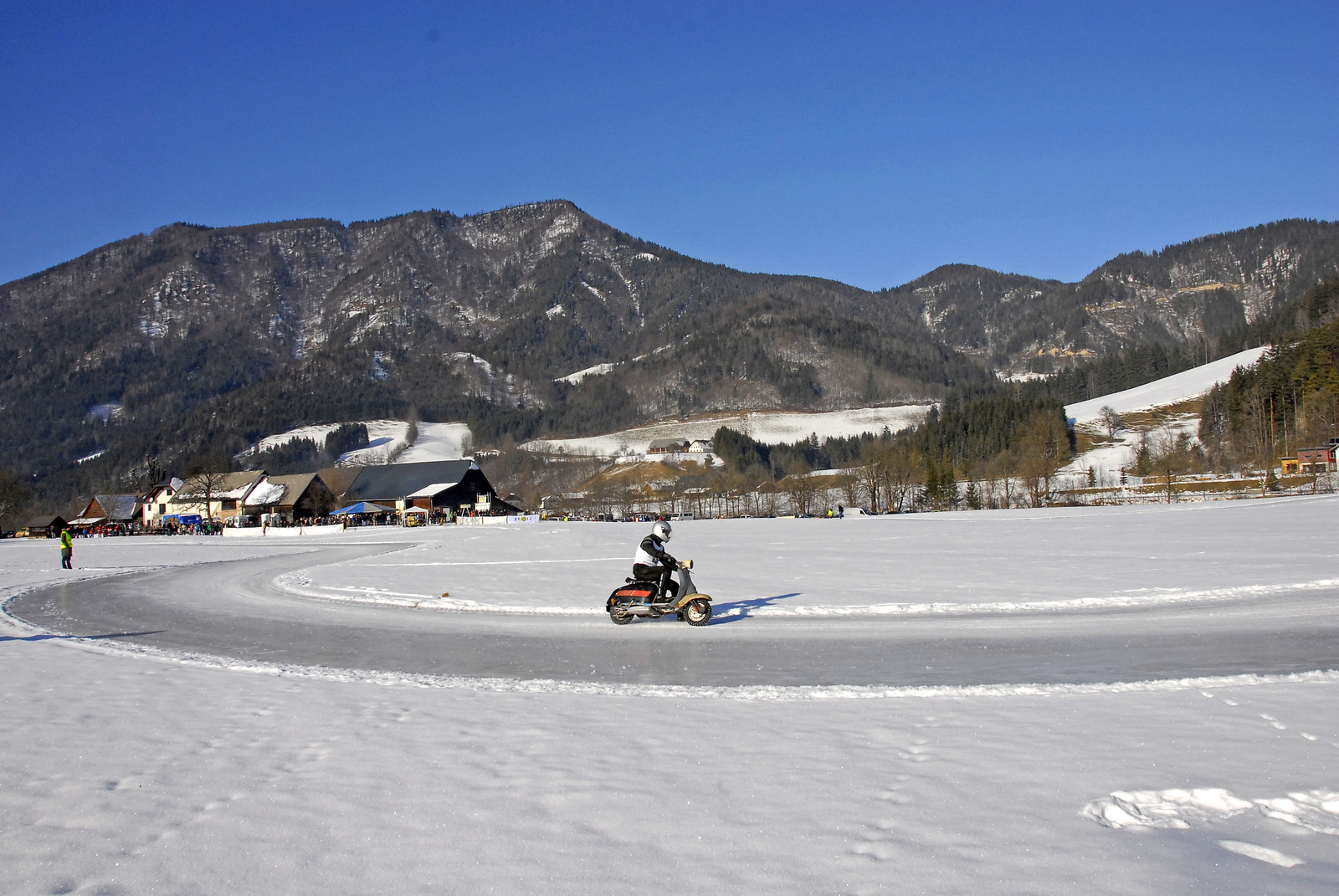 After two practice laps for each participant, there are two judged heats. They race against the clock and not in pairs or groups of four as in professional ice speedway, for example: a requirement of the district authorities to avoid collisions, and besides, you don't want to have to go to work perforated on Monday after a slip. After all, there are around 250 special screws in each tyre, and the spikes are set up and arranged according to a personal recipe.

Spectacular drifts and decisive counter-turns are part of the good show; the few take-offs are visually valuable, but all harmless to health. A refreshing Ybbstal invention and Mostviertel speciality - which will hopefully take place again soon, weather permitting!