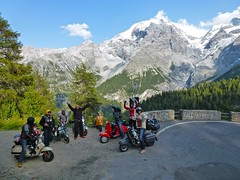 Sometimes fate just brings together people from the most diverse strands of life. In our case, the uniting feature was our common love for Vintage Vespa. I suppose few of you would spontaneously join a Vespa tour that sounds like sheer torture: 2,200km in five days including the Reschenpass, Stilfser Joch, Gavia Pass, POLINI city Bergamo, on the coast towards La Spezia, Pontedera (home of PIAGGIO), Pisa, back towards the SIP SCOOTERSHOP headquarters at Landsberg am Lech by Modena, Lago di Garda and the famous Brenner Pass.

However, twelve highly motivated riders started on 12 July 2011 at around 9am on their journey into the unknown. What was sure was that the Vespas involved had to endure the extraordinary strains of this trip to guarantee a lasting memory. No major incidents were reported during the first 200km until the first breakdown just before the Italian border at Hotel Erika in Tyrol. The engine did not show any throttle response so we changed both carburetor and stator plate. Diagnosis: vital signs are stable but weak. Off goes the cylinder. Piston perforated, rotary valve okay. After some more technical assistance we were off to the Stilfser Joch (2,757m above sea level) but only managed to run ashore in a little guesthouse for the night with lots of tetra pak wine. Some more tinkering with the defective Vespa ensued, the clutchside oil seal was changed and the Vespa finally came to life again.
After enjoying a proper breakfast we headed off to Bergamo, home of POLINI. We could take our first glimpse of the new 210cc aluminium cylinder kit, were shown the premises and even got professional help for our defective autolube Vespa PX. Thanks a lot guys. In the vening we finally reached Forte dei Marmi. The members from Vespa Club Massa gave us a warm welcome and literally drowned us in club merchandise.
One highlight followed the other so we visited holy ground the next day at the PIAGGIO headquarters. There we admired the assembly lines where the Vespa LX, GTS and the new old PX are produced. 35 mechanics are working two shifts and approximately four hours until a PX model is assembled and ready for its first test run. A truly memorable experience. After taking a quick splash into the sea at Pisa, we took delight in another memorable experience as our head of goods incoming performed a first class karaoke session. If it wasn’t for his job at SIP, he’d certainly make a heck of a crooner.
The next morning we passed by the famous Leaning Tower of Pisa and quickly stopped at the Ferrari headquarter in Maranello. Due to a blown clutch the group split into two. While the older guys among us had a party of their own in Pavullo nel Frignano, the rest was sipping Aceto Balsamico in Modena. Once back together we headed for Lago di Garda to get ourselves a proper sun tan, relax and have a good meal.
The trip back from Garda to Landsberg am Lech was pretty much routine but had us get wet to the bones. All in all it seems that Vespa is all over the world and all participants of this magnificent ride will certainly be back for more next year. Gentlemen, start your engines.

All the best, Christian from SIP Scootershop.

You will find tons of pictures of the tour here: 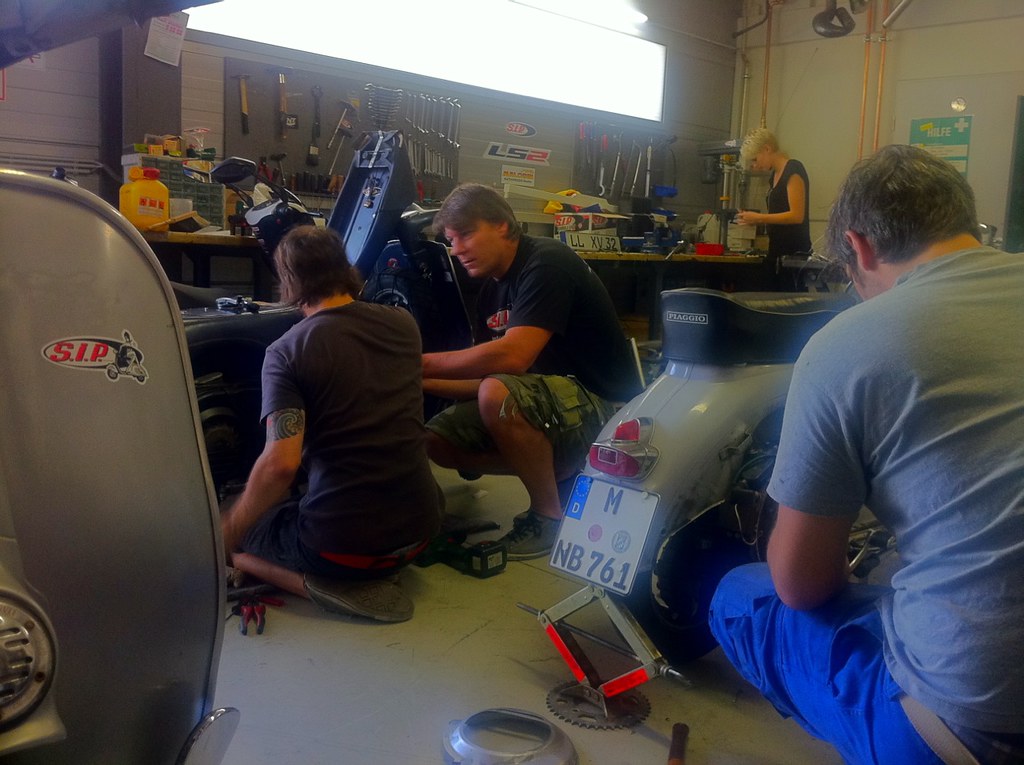