Between 2015 and 2019 the “Vespa Parade Paris” grew from 50 to 300 Vespas. A great increase for an event that is now eagerly anticipated by everyone. It is organised every year by Vespa France and its partner the Paris scooter shop “La Clinique du Scooter”, with support of Vespa Club Paris Ile-de-France.

Every year the Paris Mayor’s office imposes stricter and stricter restrictions on all two-wheeled vehicles, both motorcycles and scooters. The Vespa Club Paris and the FFMC, the French Motorcycle Federation (“Fédération Française des Motards en Colère” equivalent of Motorcycle Action Group) continue to defend their right to ride in Paris and its suburbs, with Classic Scooters, or for free parking and to not be obliged to wear a mask under a crash helmet etc.. This year 2020 has been greatly affected by the Covid crisis, which has made the organisation of the event difficult if not impossible. Many scooter events this year have been cancelled around France as all over Europe.

The organizers of the Vespa Parade Paris, Vulcan Scooter Secte

Because of these obstacles, it therefore became impossible to organise the “Vespa Parade” in Paris in its usual format, that’s to say 300 scooters for a breakfast meet up, a massive ‘Ride Out’ in Paris Centre and a fabulous lunch in front of the Eiffel Tower.

No, for this latest day dedicated to the Vespa Scooter, we were only able to obtain the support of the “Seguin Sound Pub” and of a few faithful partners. We decided to rename our event « A Paris Vespa Day », and to organise it at the “Seguin Sound Pub”, a micro-brewery on three floors on the “Isle Seguin” in Boulogne-Billancourt, 5 minutes ride from central Paris, (and the historical site of the famous Renault car factory). Considering the strict sanitary conditions imposed, we decided to organise a static event. No ride out and only from 12 midday to 10pm. The Seguin Sound pub assured us of its application of the strict rules that we needed to adhere to. We even had a 100 or so masks made specially in the colours of the Vespa Club Paris Ile-de-France, which were distributed to the staff of the Seguin Sound Pub & our own volunteers and members. 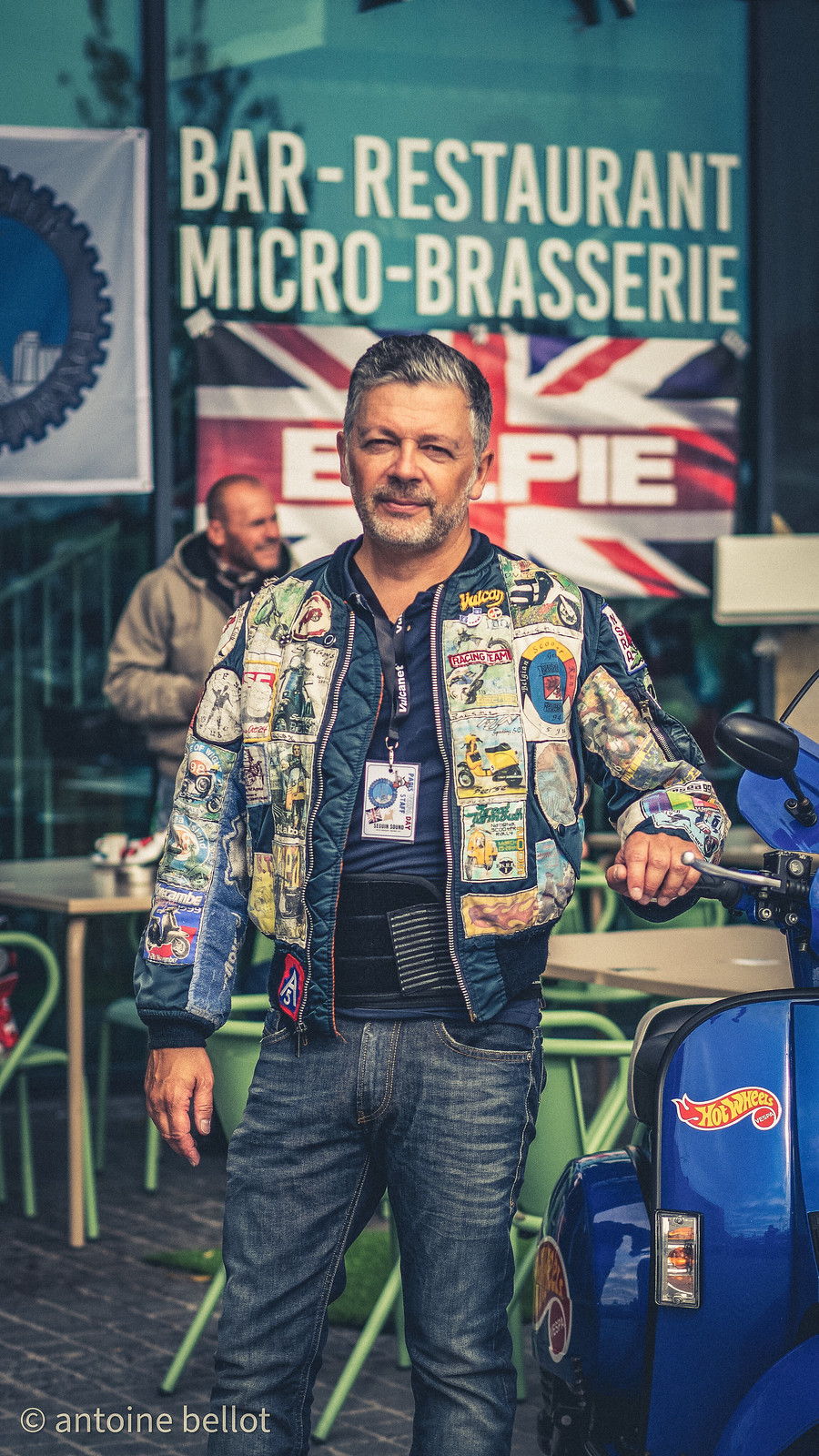 After having discussed the organisation of our event with Richard « Richie from Liverpool », the boss and Vanessa, the manager of the Seguin Sound pub, we launched the usual promotion for the event on social medias. We needed to find a DJ for the day and a band to play the event. « EelPie » the best Who tribute band had already said they’d play and Remi, the lead singer, offered to play two sets in the lovely Seguin Sound Pub concert hall, which had been decked out with beer barrels for the bar. William Bird, a well-known Parisian mod scene DJ did a set and was accompanied by two other DJ’s Francis Viel and Mac Von Simca, who all span their vinyl on the Technics MK2 systems.

From 8am the Vespa Club Paris Ile-de-France committee (Lionel, the President, Jean-Luc the Treasurer, Xavier the Secretary and myself), aided and assisted by a dozen volunteers, got to work welcoming the first scooterists who turned out, in groups of friends of Scooter clubs from midday, in the wonderful Parisian sunshine! A giant breakfast buffet was waiting for them with laid on the chef Victoria McGarvey, under the parasols. A selection of 7 beers was available brewed by Kieran Bird, as well as the delicious special brew, « Vespa Club Paris Lager ».

At the beginning of the afternoon, our president, Lionel announced the day’s programme and thanked the 120 or so scooterists who had turned out on their Vespas and Lambrettas, either solo riders or clubs like the Palmarium SC from Perpignan, Vespa Club Chalon or newly formed Sword Squad SC from Paris. Once dessert had been eaten, it was time for all the scooter riders to make their way down to the concert hall at Seguin sound Pub, for the Eel Pie’s set. They gave a great performance of Who classics and from Quadrophenia, Pete Townshend, Roger Daltrey, John Entwistle and Keith Moon, would have been proud of this Parisian tribute band. After the concert, the Vespa Club Paris Ile-de-France were pleased to welcome the famous French comic book artist Frank Margerin, who turned up on a Vespa PX and was made an honorary member of our club.

So, as everyone made the most of the sofas and deck chairs on the banks of the Seine, which kind of reminded us of the beach at Brighton, everyone admired the Vespas that came and went in the bright sunshine. People milled around the various stands of our sponsors such as Vintage Motors, Marko Helmets, KSH Helmets, Den Stripping or Junior Button. We also did the draw for our tombola, that this year had nearly 2500€ of prizes.

One uninvited guest showed up during the afternoon in the shape of a sudden thunder storm, which hit just before the second set from “Eel Pie”, and meant that the tombola draw took place inside Seguin Sound. During this imposed pause, Vanessa, Florie and the barmaids worked hard to serve the numerous thirsty scooterists, each of whom hoped to be the lucky tombola winner.
The lucky ones won prizes like a Marko helmet, jeans made from Armalith from Esquad Skeed or Bolidster. Other prizes were offered by les Petites Créations de l’Arche, Wheel Secure, Scootering Magazine, Vulcanet, ENI Lubricants, Facom, OrMotors and Original Drivers.

For this first edition of a Vespa Parade transformed, it was a real success, notably thanks to a motivated team at the heart of the Vespa Club Paris Ile-de-France, and especially with the help of the Parisian scooterists who chose to turn out, despite the sanitary restrictions in place.

Photos shot by Antoine, the official photographer for the day are available on our Facebook page.

We look forward to seeing you all at our next event. Take care and Stay safe.