Do not bring the fish, but teach fishing

For 34 years, Dr. Soeren Gatz was the senior physician in charge at the Landsberg Hospital. Ten years ago, the now 72-year-old took early retirement to fulfill a dream he had already cherished as a medical student: to bring medical aid to people in the Third World. He is a founding member of the association "Humanitäre Hilfe e. V. Landsberg, Partner for Health and Education". The association was founded in 2005 by doctors and nursing staff of the hospital in the town near the Lech and today has around 100 members, many of whom sacrifice their annual leave or special leave to help those in need. Dr. Soeren Gatz has been the 1st chairman since 2019. Alexander Barth, one of the managing directors of SIP Scootershop, has been supporting the work of the association for several years with regular donations. Thus, at the beginning of July 2021, 5,000 euros were once again handed over to Dr. Soeren Gatz and his team.

In cooperation with local NGOs and the Evangelical Church (EEC), the association looks after eight hospitals and some schools in Cameroon. The NGOs "Bon Secours" and "World Mercy Fund" (WMF) took over the logistics and together they have brought more than 100 beds and medical equipment of all kinds to the civil war-torn country on the west coast of Africa since 2015. The German government and industry sponsors also support the projects. In March 2020, the first Corona wave swept across the continent. Dr. Gatz and his team were put on the last plane by the German Foreign Office and had to leave the country. A hospital and a school could not be further supported because of the war. In October of this year, however, a team will set out again to bring medical equipment, aid and training to the people of Cameroon. After all, the education and training of local personnel play a major role, and Dr. Gatz still hears the words of a doctor from Cameroon: "They didn't bring us fish, they taught us how to fish." 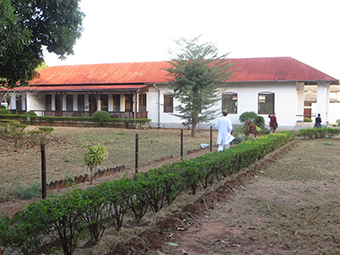 During the so-called "refugee crisis" in 2015, Dr. Gatz cared for people who had found refuge in a Landsberg gymnasium. In the process, he met Brother Isaiah from St. Ottilien, and the two men discovered something in common: they want to help people in Africa. Brother Isaiah runs St. Benedicts Hospital in Ndanda, Tanzania: a hospital with 360 beds. During long, late-night talks, a cooperation was agreed upon, and since 2018 "Humanitäre Hilfe e. V." has also been involved in the state on the east coast of Africa. The country is currently spared from war, but Corona is ravaging the suffering population. The official side denies the pandemic statistically and politically. There are no care facilities for advanced COVID patients within a 500 km radius around St. Benedicts Hospital. In March of this year, both President John Magufuli and Abbot Placidus Mtunguja died from the disease, among many other people, and according to Dr. Gatz, Tanzania is "about sheer survival." There are no vaccinations and hardly any oxygen.

That's where the new intensive care unit at St. Benedicts Hospital plays a crucial role. Together with a Munich architectural firm and thanks to many donations, the Landsberg association was able to get this department up and running in 2020: Four intensive care beds, seven dialysis stations and four areas each for mother/child and newborns could be set up. "The need is unimaginable," Dr. Gatz describes the dramatic situation, emphasizing the importance of the oxygen production facility, "because now ventilators, incubators and anesthesia equipment can be operated."

The need for oxygen has increased significantly due to the pandemic, and the next project is an oxygen filling plant. The filled cylinders will serve as backup during emergencies, facilitate patient transport and can be sold to surrounding hospitals. Dr. Gatz estimates the total volume of the project at around 75,000 euros. Donations are urgently needed to combat the consequences of COVID infections in Ndanda.

In October 2021, Dr. Soeren Gatz will again leave for Tanzania with a team to provide direct help on site. The fight against Corona will be a race against time.