SIP team off to Southern France on their Vespas 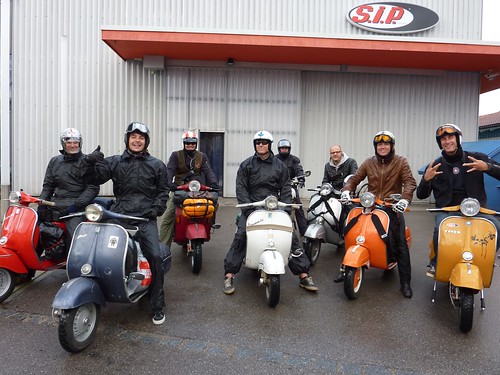 Eight 2-stroke addicted Vespa junkies head for a little spot on the map called Mormoiron near Avignon in France, a mere 1,000km ride. It is raining!

So we get out our waterproof rain gear and embark on our journey neatly packed. Remember, “There is no such thing as bad weather…!”

The rain would be a steady companion right until the middle of the Alps, varying only between light drizzle and torrential rainfall until we had crossed the Oberalppass and the Furkapass 2,436m above sea level (a mystic ride through clouds and snow).

The first leg of our journey brought us to Saint-Maurice right above Lake Geneva where we encountered a friendly welcome with crisps, gummi bears and beer by the guys from www.70s.ch, a local scooter club. An extended round of introductions ensued with 70s member “ExtremBoy” reasoning about the possible size of the manhood of our SIP colleagues Olli (Vintage Vespa expert) and Matze (wrench wizard) compared to their stature (both of them are quite sizeable characters!). Our next stop was the famous Montreux Jazz Festival right on the shores of Lake Geneva. Two thumbs up for both an impressive scenery as well as culinary skills…but where exactly was the jazz? After a rough night out at ExtremBoy’s studio we visited Rocco at Martigny who proved to be completely mad about Vespas. His private collection is simply amazing, he calls himself the proud owner of one version of every Vespa model that has ever been built. Needless to say his scooters are all restored to perfect original condition. More treasures were about to be discovered in the basement and some of them changed hands rather quickly.

Among those treasures was a seat for a SS and a Rally speedo that Alex and Ralf, the two SIP founders, bagged for themselves. Michael, aka the Danish guy, bought a picture of a Ford Oldtimer dashboard, Olli returned with a VBB and a VNA while Matze opted for a VNB. Thanks again, Rocco!

After passing the Mont Blanc glacier, we took the highway full throttle style to Grenoble and on to Mormoiron. Once again, we were welcomed in a very tasty way with an Asian buffet and first-class French wine. Of course we found the time to do a mandatory cannonball into the heated pool afterwards. Henry Mouries, his charming wife and their son Baptiste proved to be outstanding hosts during the next days. Thanks again for all the comfort we could enjoy, it was much appreciated after our long journey.

On the next morning, we had a “petit-dejeuner“ and then headed for Avignon. After enjoying a huge three course lunch, we visited the former papal residence which surprised us with a lot of crazy people. It turned out that we had bumped into an art festival which turned the whole city center upside down. This explanation somewhat helped to restore our peace of mind.

Our ride back to the meeting of the Scooter Club du Sud-Est at Mormoiron taught me the important lesson that even a Vespa Sprint won’t go very far with an empty tank. Thanks to my colleagues, I made my way to the next gas station (40km altogether) in “push mode”. What an experience.

The meeting was all about drinking, singing, dancing and getting too little sleep. The drinking continued the next morning when we visited our old friend Jean-Paul at his vineyard for some wine tasting. We had some really noble grape that brought us back on track when Jean-Paul pulled a bottle of red wine from 1976 from the dusty shelf. We drank with the appropriate devotion. A proper alcohol level and a belly full of appetizers with a red wine-onion topping were the immediate result. The group then split into two camps, the pool dwellers and relaxers and the ones motivated enough to participate in the rally, i.e. Alex and Ralf.
In the evening, we were invited for dinner by the boss of ACSUD, one of the suppliers of SIP Scootershop. Thanks again for the tasty duck *** skewers and the chocolate cake. It would have been all too easy to give in to the temptation of eating the whole cake, but our sense of decency won the fight and it was just one piece of cake for everybody.
Back at the meeting we continued just the way we had ended the night before, a fact that did not exactly help our plans of continuing our journey on the next morning.
We kept our cruising speed on a high level both for reasons of controlling our body temperature and to reach Nice and the Cote d’Azur in time.
Cannonball into the sea, wrenching, on to Monaco, wrenching, pit stop at the casino, wrenching, on to San Remo where we had a collateral damage through a crash against a wall due to a damaged headlamp.
Dinner at the restaurant, a good night’s sleep in a nearby hotel, breakfast, getting the injured to the hospital, X-ray, broken thumb, rescuing the scooter from the street, train station, farewell, on to the Lago di Garda.
On our way we lost our Danish friend for about 200km because he preferred to ride relaxed rural roads rather than bolting down the highway.
In Garda we met our good friend Ali who took us to a nice all you can eat and drink fish restaurant and another 12 course meal. Our culinary needs were more than fulfilled.
What followed were two days of relaxation at the Lago incl a boat trip etc… In order to keep the level of envy among you in check, we will cut our report short at this point and close the road book with the conclusion that walls are not there to be kissed and that French people speak neither English nor German. And while our scooters are still in good shape, we will go on and on just like that.

Take a look at our picture gallery here: 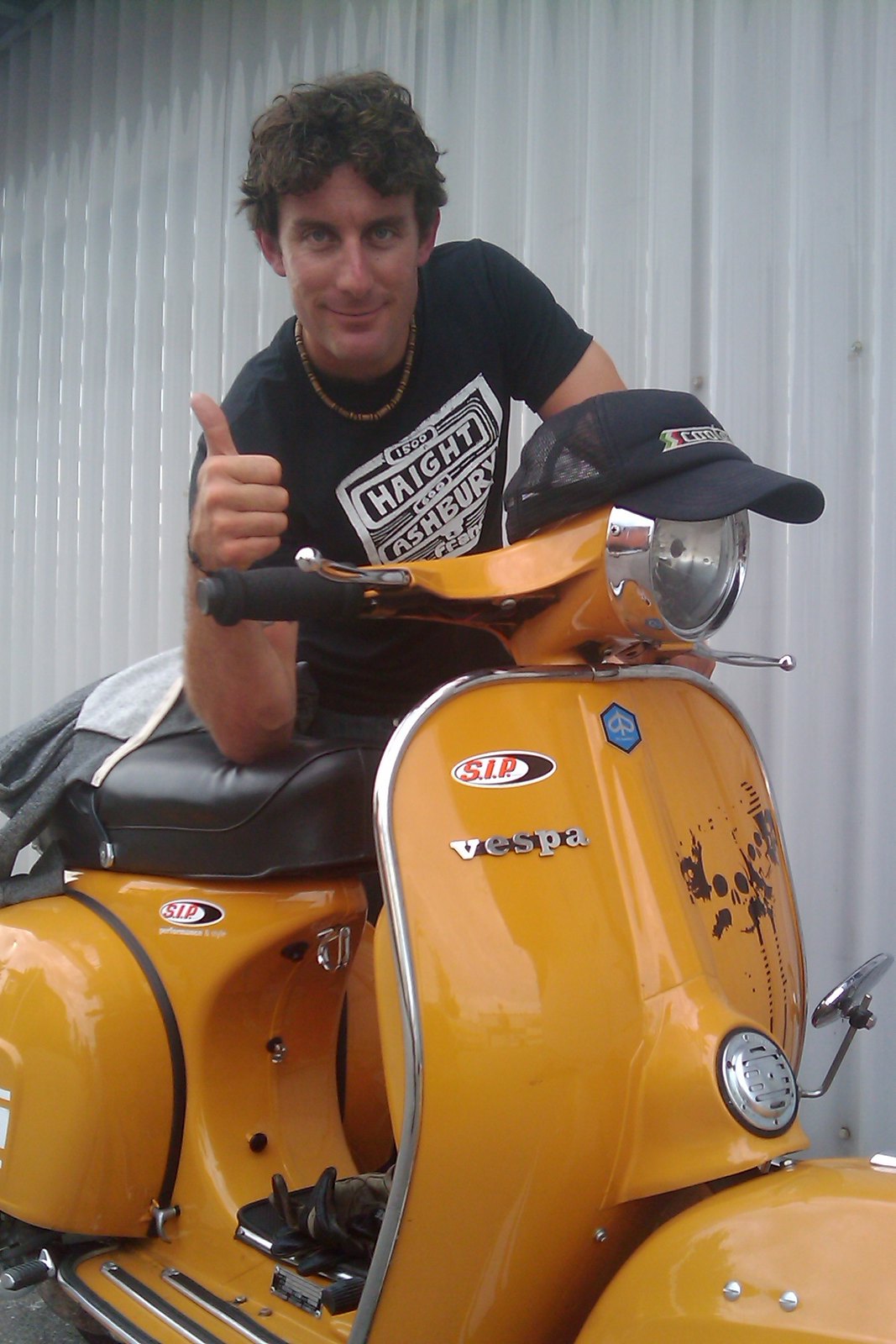