On a Vespa to the roof of the world 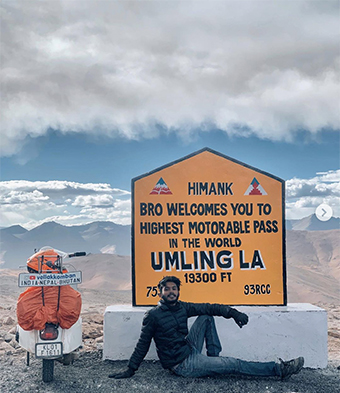 The Zugspitze is 2,962 meters high, Mont Blanc 4,808, the base camp "Kala Pattar" on Mount Everest is still 5,675 meters above sea level, but at 5,883 meters, the Umling La Pass in northwestern India is even a bit higher. It is considered the highest motorable road on earth, trumping a pass in Bolivia. Oxygen levels at this altitude are 50 percent lower than those of us lowlanders, and in winter temperatures drop to a cozy -40 degrees Celsius. The road was opened in 2017 and leads to the less safe border area of Aksai Chin. Not a place you necessarily want to visit.

Unless your name is Misab and you ride a 1994 Bajaj Chetak 150, which is an Indian Vespa licensed build roughly equivalent to a Vespa 150 Sprint. Just the day the 18-year-old got his drivers license, Misab got on his scooter and tackled the Umling La Pass. With plenty of gas in the spare cans, a lot of optimism and no modifications to his Chetak 150, Misab rode 10,700 km in four months. In the process, he set two unofficial world records: He is the youngest and first rider to climb the Umling La Pass on a two-stroke. Over gravel and asphalt roads, accompanied by flocks of sheep and army trucks, he made his way to this lofty height in front of the impressive mountain panorama of the Himalayas.

"I love my scooter because I can go anywhere on it. And if there are any problems, they are only mechanical," says the geology student. "With a passenger, you can't even make the pass on a Royal Enfield Himalayan LS 410, but for me alone on the scooter, it was easy. I can hardly put my happiness into words and have realized a big dream."

We are impressed and congratulate Misab and his Vespa for this outstanding achievement. You can follow Misab´s adventures on Instagram: https://www.instagram.com/vellakkomban/

Image Gallery: on a Vespa to the roof of the world