Already on May 18th we reported about Fabio Cofferati, who wants to repeat the historic feat of Roberto Patrignani in 1964: a ride from Milan to Tokyo, where he will present a trophy of the Vespa Club d'Europe to the Olympic Committee, on the occasion of the 2021 Summer Olympics. 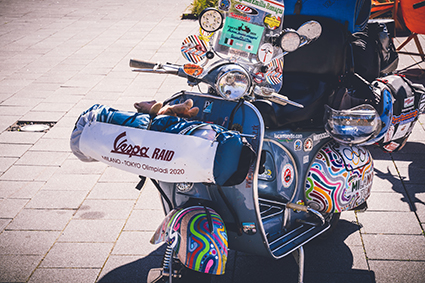 Fabio left Milan as planned on June 12th and spent his first night in Chur, Switzerland. A day later, on June 14th, his visit to SIP Scootershop was on the route and we were from noon in joyful anticipation. The hours passed, from Fabio no trace or message. When we already started to worry, SIP employee Luigi reported around 4:45 p.m. that Fabio would probably arrive in about an hour. He had been sitting at Markus André Mayer's in Waltenhofen for just too long with schnitzel and beer.

At 5:20 p.m., he finally rolled into our yard and was met by Luigi. Over espresso and apple spritzer, Fabio told us about his first two days, which had largely gone smoothly. Only the speedometer was a bit twitchy and the Vespa 150 VBB2, built in 1963, was promptly pushed into the workshop, where the mechanics André, Jesco and Luigi took care of the matter together with Fabio. With combined forces and skill, the speedometer cable was replaced and soon the installed SIP speedometer was fully functional again.

A glance at the clock made it clear that a continuation of the journey was no longer to be thought of. So SIP boss Alex gave the „instruction“ to get Fabio a hotel and to reserve a table at the local Italian in the „Trattoria“. A little later we sat together with Fabio in wonderfully mild temperatures, in the shade of the Landsberg Bayertor, with cold drinks and Italian delicacies and told not only scooter stories. The evening ended harmoniously and Fabio found well-deserved rest in the guesthouse „Zweite Heimat“, directly at the historic city wall of the Lechstadt. His Vespa, weighing 160 kilograms with luggage, spent the night safely in a friend's garage. Fabio summed up the day: „I had no idea what a beautiful town Landsberg is, I could easily spend my vacation here. And the reception at and the help from the people at SIP Scootershop was just warm and outstanding. I will now call my wife, post the day on Facebook and then sleep wonderfully.“ 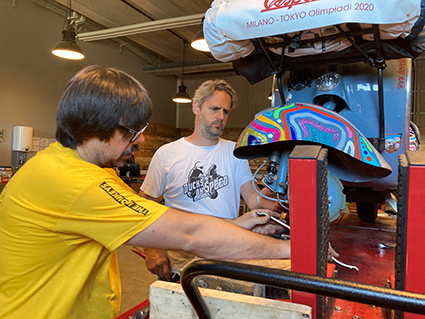 Bright sunshine the next morning. Not a cloud was in the blue Bavarian sky and the mood of departure was marred only by the fact that the shock absorbers of the Vespa front and rear were no longer in the best condition. Again the instruction went out from the SIP captains Alex and Ralf to repair this circumstance immediately. So back into the workshop! Jesco, Luigi and Fabio installed new SIP PERFORMANCE rear shock absorbers with external reservoir and also SIP PERFORMANCE shock absorbers for the front. Now the Vespa was really ready for the long ride to the east, which promises to be exciting.

Why? Well, Fabio still doesn't have a visa to enter Russia due to the Corona pandemic. His plan is to go to Latvian Riga and get a permit there with the help of the Italian embassy. We directly contacted our friends from the Vespa Clubs St. Petersburg and Moscow and put them in contact with Fabio. Maybe they can help, we keep all fingers crossed. Fabio himself is the serenity itself: „I heard that the restrictions for Russia should change in the next days and I put my hope on it. What should I do! I will ride as far as I can.“ 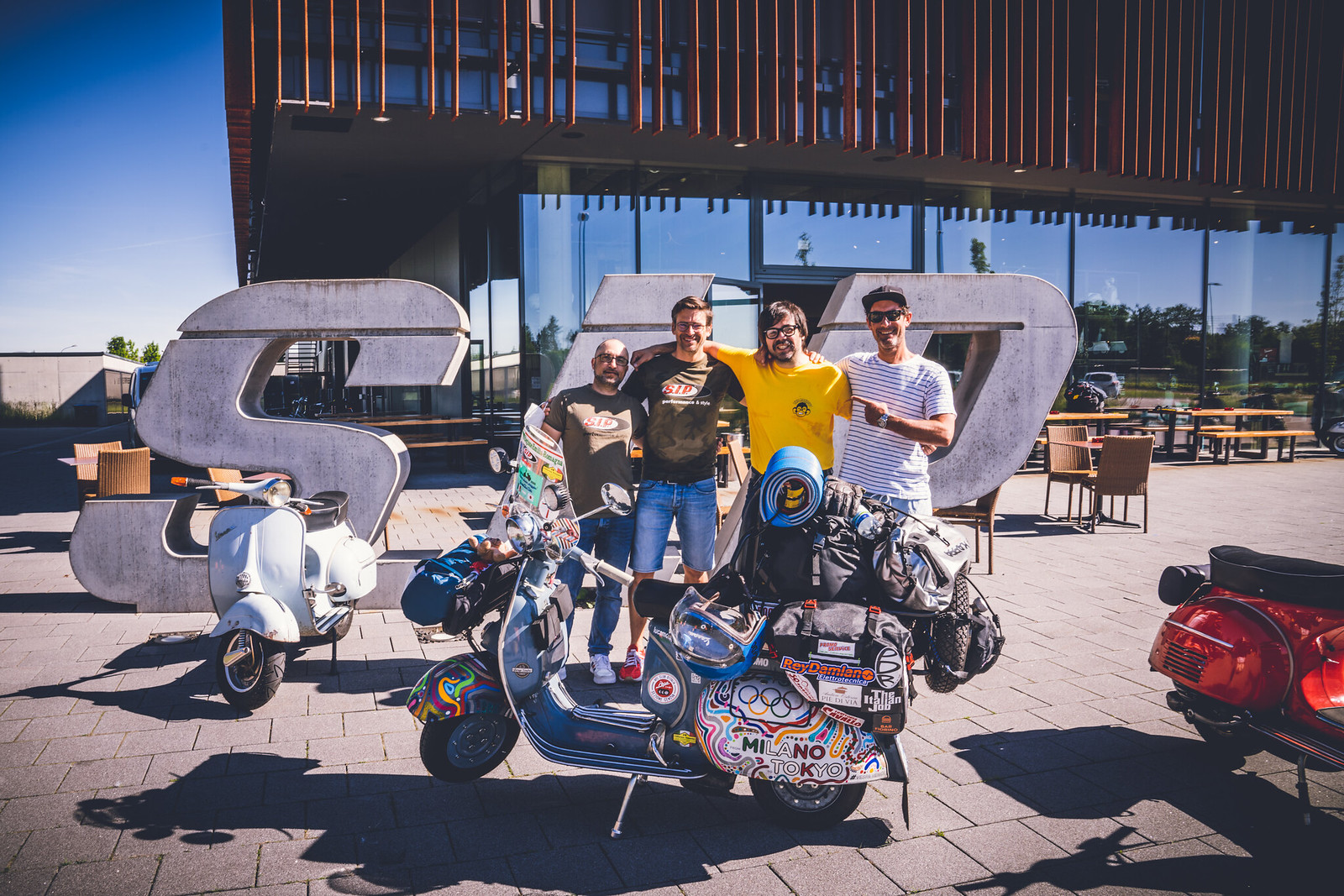 Whether and when he will arrive in Tokyo is beside the point. For Fabio, the journey really is the destination and the first two days were already rich in highlights. After a last refreshment in the SIPERIA, he sat down on his Vespa around 2:30 p.m., waved goodbye to us and disappeared on the horizon shimmering in the heat. Somewhat wistfully we looked after him. We wish him and his Vespa all the best.

Those who would like to watch Fabio on his exciting journey and accompany him virtually can do so on Facebook: Ancora in Vespa da Milano a Tokyo