For a long time it was quiet around our "in-house" rapper: Christian Seidl aka Winston. Almost four years have passed since the last album "waschecht". But since the beginning of March, his new single "Endorphin" can be heard on Spotify, Amazon or iTunes. The man with the sonorous speaking voice is back with a love song.

Christian is almost an old hand at SIP Scootershop. He has been responsible for the German-speaking wholesale trade since 2007 - so it's quite possible that many a customer has experienced his very exclusive Winston performance on the phone. Christian is also involved in the organisation of SIP events. Of course, in his private life he is also on two wheels: he rides a 1976 Vespa Sprint Veloce with a PX 200 engine and 211cc Malossi sports cylinder.

But back to the music: Endorphin - the word is composed of "endogenous morphine" and means nothing else than "an opioid produced by the body itself". Even though opioids have become the most common cause of death in the USA for years - rapper Winston has nothing to do with the pharmaceutical industry. His opioid is love, as he candidly tells us: "As is so common in rap, I have knitted plenty of metaphors into the verses. They leave enough room for speculation. In the chorus, however, it becomes clear that it's about the feeling of being freshly in love. Endorphin, after all. Not only teenage hearts can dance the samba when kissing. But I don't necessarily want to get too far ahead of myself - listening for yourself is the trump card!" 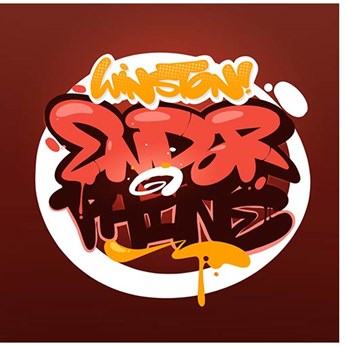 The beat from Bremen producer Bjorn von Kalt bubbles around a smooth piano loop. The 43-year-old linguistic acrobat Winston seems to have had a bad amorous experience - there's no other way to interpret his rhymes. How did the track come about? Winston reports: "My dear colleague and beat builder Bjorn sent me the beat to 'Endorphin' and I immediately had a red thread in mind. I didn't know where it was going from the beginning, but I followed it. The three verses were finished within two days and haven't been changed since. The chorus, which is supposed to marry the verses together and give them meaning, came a little later, almost on its own."

The rapper from Landsberg is not an unknown quantity. As early as 1996, he founded the "Chefetage" with DJ Socka and Daster. They toured Germany and released various records. He also collaborated with DJ Stylewarz, PalOne, Donato, Tatwaffe, Spax and Flo Mega on his 2017 longplayer. Since then, times have changed fundamentally. The internet has become even more important for the distribution of music and physically you will never be able to hold "Endorphin" in your hands.

He can't and doesn't want to make a living from his music. But he's not the only one who thinks that's a good thing; we at SIP Scootershop are also very happy that Christian will stay with us as a staff member: "I don't have to rush after release dates or label specifications. I can simply wait until the muse kisses me again and lets me write something good. When that will be, I don't know. I let myself be surprised."

This relaxedness also characterises "Endorphin". Winston conjures apt metaphors and striking images. He varies rhyming techniques and lets his voice act like an instrument on the listener. How would he describe his style? Hamburg school? Berlin gangsta rap? Old school West Coast? Winston laughs, "I would describe my flow as relaxed Landsberg East Hill boom bap rap." And a little more seriously, he adds, "It's just fun to sharpen the pencil and play with words. If a rounded piece of music comes out of that, that's great. It's even more great when people can listen to it. The 2017 album took two years to make, from the first track to the final completion. After that, it was quiet for a while. Now I feel like doing it again. Let's see how much time passes this time until it grabs me again."

Brand new is the video, which has been online for a few days and was created in collaboration with the Hamburg artist Nguyen Anh Duc aka Ismilealot (https://www.ismilealot.net/). To the sounds of "Endorphin", a cool artwork is created as if drawn by magic.

An old acquaintance, the Dortmund producer SAL, has also fallen in love with "Endorphin" and delivers a "Delicous Remix" of the track, which once again emphasises the chilling elements and elegantly refines the hookline. Both videos can be found on Winston's YouTube channel: https://www.youtube-nocookie.com/user/winston77LL

Winston's fans can rejoice, because in the near future he will not only be kissed by the ladies, but also by that very same muse again. New tracks are currently floating impossibly through the ether and want to be captured by Winston and put down on paper. And it's not just us at SIP Scootershop who are looking forward to it - Landsberg, Germany and the rest of the world can make good use of his "mellow vibe" in these times. Because unlike the opioids of the pharmaceutical industry, Winston's sound is rather healing - without deadly side effects.

Dietrich is content editor at SIP Scootershop and supporter of Leverkusen soccer club...