It's thursday, the 5th of july 2010, 7:45am. I fasten my backpack to my '73 Sprint Veloce that's waiting in the garage, wave goodbye to wife and child and - through the morning mist- start my journey to the meeting point: SIP Scootershop, Landsberg am Lech, Bavaria, from where on we were going on a long ride to Croatia, to Villach via the Großglockner and the Wurzenpass, past Ljubljana, to the ferry that was going to bring us to the island of Cres.

So seven hightly motivated men are ready to go, striking a pose on the street for the obligatory group picture... only return after 200m due (to a busted clutch) and put up with a delay of 2 hrs. But for the deft SIP guys that of course was mere child's play. An equally ambitious second start and 250km later, we picked Stoffi and Zini (both of Stoffis Garage (Austria)) from a romantically flowering meadow in fron of MacDonald's in Zell am See. Together we drove to the top of the Großglockner which presented itself in sunny perfection and was going to be remembered as a beautiful impression. In Villach we meet Heimo and Roxy (both of VFG Scooteria Leibnitz) in a Harley joint and - after a night in youth hostel bunk beds - we continue out trip 1611m upwards to the top of the Wurzenpass, where the Slovenes Uroš, Luzian and their entourage are already waiting for us.

Unfortunately the jouney didn't stay free from accidents. After a cordial welcome and a short rest, Uroš skid out of a turn and crashed into a guardrail, only shortly after we departed. He didn't hurt badly but nevertheless had to finish the rideout early. After a late arrival on Cres, he and his companions left the island the following morning. Dear Uroš, get well soon! In the meantime, our group had grown again. Another SIP employee (Moritz), Mumpi and Christian from Wolfsberg/Austria had joined us.

What a relaxed first day on the island! We refill the empty tanks and spend a couple of sensational hours on a fishing boat in the turquoise water. We swim through a blue lagoon, chill on the beach, jump from cliffs and get tanned in the sun. In the evening our national team gets world champion of the hearts and we close this day's book at the annual fisher's  party in the tiny village of Martinšćica. Driven by the idea to cross from Cres directly to Venice by ferry we drive to Mali Lošinj the next day. In vain, as this ferry-connection obviously exists only in our phantasy. A beautiful and undeservedly neglected island, connected to Cres by a bridge. We then spend an afternoon of sunbathing followed by suckling pig vs. lamb (culinary competition) and Spain vs. the Netherlands in the evening.

The 7:30 ferry doesn't bring us to Venice the next morning, as desired, but back to the croatian mainland. A few minor breakdowns later, we drive past Triest on the highway at full throttle. Via Venice, Padova, Vicenza and Verona to lake Garda. The evening is relaxed again. Tasty food in the Lidocafé Garda and a nap in the sunbeds by the lake. Kissed awake by  the morning sun, we start early at 9 am on the still quiet lake and wakeboard on it, dragged behind a friend's speedboat. All of our crew showed a surprisingly good performance. Although the journey back resembles a truck-chase over the Brennero, all went well, in spite of a little carburetor trouble. So we returned safe and dry and -never minding our stiff necks and sore butts after a good 2000km- are already looking forward to the next year and the Vespa World Days in Oslo.

Keep your head up and the engines runnin’.

Here's the rest of the pix: 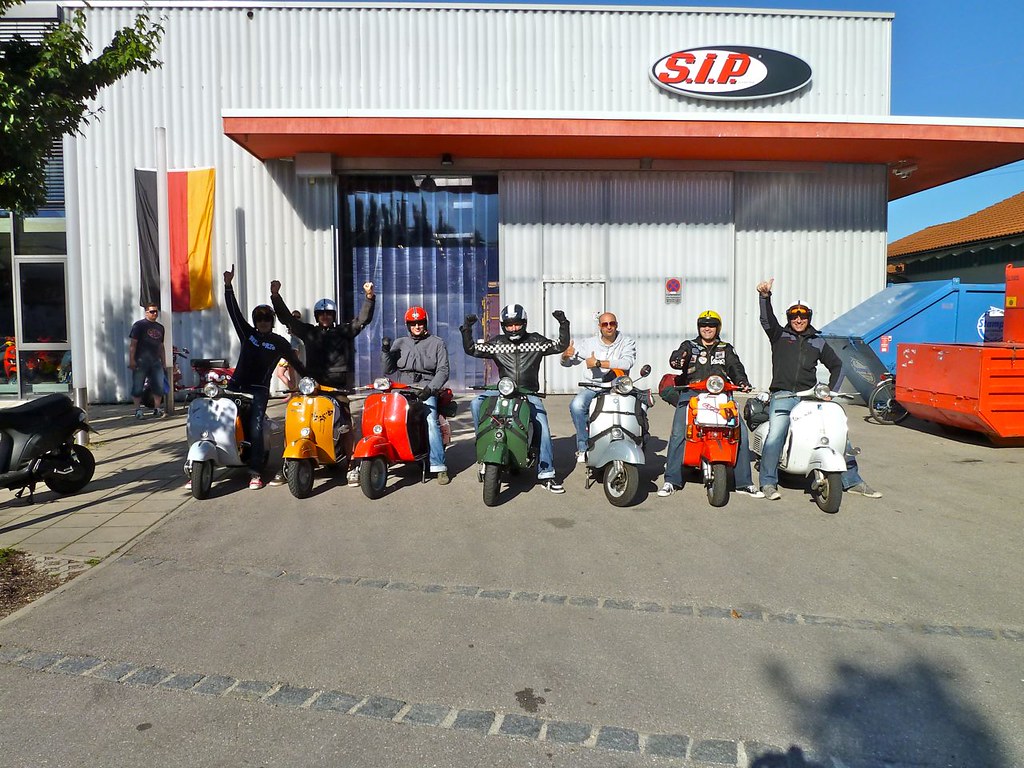