Everyone has their favourite Vespa or simply a gap in their home fleet that needs to be filled. SIP Scootershop managing director Alex had been looking for a Vespa Rally 200 for years. The sports scooter from the 70s was simply a must-have. If you look around for a Rally 200 on the internet (as of June 2022), the offers are manageable and up to 14,000 euros are called for this popular scooter.

A tragic story brought a Rally 200 to Landsberg am Lech and Alex a few years ago. We don't want to go into the details here. 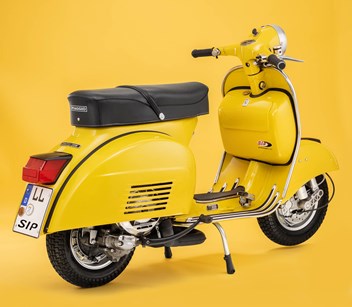 The first year she rode on the road with silver paint and black, powder-coated attachments. Due to the original engine, the sound was also vintage, which was nice and unusual at first. The power was within limits and the driving experience could be described as "comfortable". But Alex also had a tuned scooter in the garage, which meant that the Rally 200 was used less and less. Riding in style is all well and good, but slowness is no condition in the long run.

Tuning for the engine was needed. The aim was to build a durable, powerful touring scooter that Alex could ride quietly and unobtrusively. But strong on hills and fast on the motorway. At that time, an aluminium cylinder from POLINI was fresh on the market and why not try something other than MALOSSI? No sooner said than done. So we built the first one with the POLINI 210 cylinder, a long-stroke shaft, SIP Road racing exhaust 2.0, SIP clutch, the original SI 24 DELL'ORTO carburettor and the variable ignition from VESPATRONIC. Only the original gearbox remained with the Rally 200. That was a promising start.

Now the look was to get an update and Alex decided on a colour that perfectly matched the year of construction. Giallo Texas with the Max Meyer code: 1.298.2935. But please, in matt, as with nitro paint, because who wants to drive a Rally 200 that looks as if it has jumped out of a candy box? But before we can start painting, the frame has to be precisely aligned on the straightening bench, because it has been severely damaged by the previous owner.

Finally, however, the Giallo Texas 935 is ready. Specialist Sebastian Kirchner takes care of the job and explains: "First we prime with a two-component epoxy primer. Then we go to the painter. He does it all with two-component lacquer and the 'nitro finish' is done with slightly matt high-solid clear lacquer. This gives the Rally 200 the best UV protection and nothing can 'chalk out' so that it still needs polishing."

Wow! The paint gave exactly the desired effect and matched the Rally 200 perfectly. 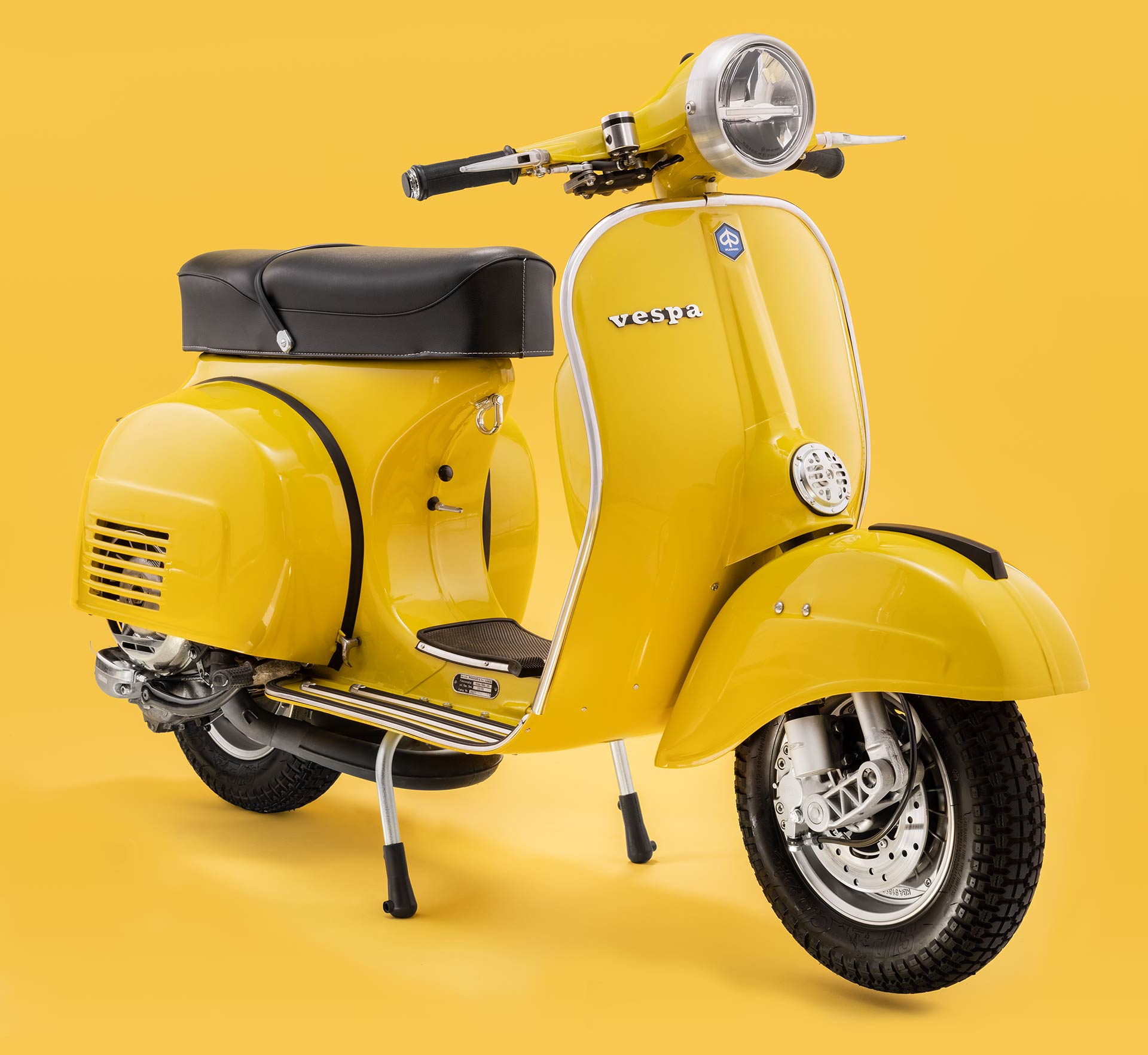 To keep the look as original as possible, the original fork was to be used first. Therefore, the dilapidated parts were remade and rebuilt, such as the spring mounts. But after some back and forth and fruitless work, the chassis was also redesigned from scratch.

Since disc brakes are simply more reliable, a SIP conversion steering column was fitted. Namely the version shortened to 185 mm with original ground clearance. For the front shock absorbers, Alex opted for the SIP Performance shock absorbers 2.0. It was important that the wing was not modified but provided with a recess. For this, the wing mount and position of the shock absorber had to be changed. The mudguard was placed as centrally as possible to give the shock absorber and spring enough space so that they do not drag on the mudguard. When the length is adjusted correctly, the Rally has an exactly horizontal profile, which just looks mega.

SIP Performance 2.0 shock absorbers were also used at the rear, and their damping effect is simply outstanding. The spring is so perfectly tuned that the Rally lies quietly on the road even at high speeds - just as it should. For the colour, Alex opted for silver matt, because it looks classy and sporty as well as discreet and not disturbing at the same time. 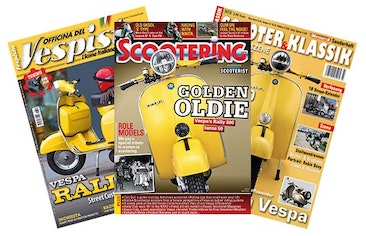 For the disc brake, Alex chose a model from GRIMECA. However, he didn't want the GRIMECA-typical spider web on the drum, but a smooth surface, because the look should be original. If you just turn the drum off, you are left with sharp edges, angular fins and the paint is missing. So Alex had the brake drum reworked by GRIMECA according to his wishes. The result was convincing.

The SIP brake caliper was also made in matt silver, similar to the shock absorbers, and fitted with MALOSSI brake pads. The CRIMAZ brake master cylinder fitted harmoniously to the handlebars without having to be modified. And the ABM expansion tank, CNC-milled in aluminium, is a feast for the eyes.

The brake line is from SPIEGLER and is made of Stahlflex. At the rear, the Rally 200 brakes on SIP Performance pads, and the clutch lever comes from SIP Style. Alex chose SIP tubeless rims with SIP Classic tyres, which are approved for speeds up to 150 km/h. The stainless steel cables are also from SIP. The stainless steel cables are also from SIP and the frame was finally protected from corrosion with a cavity sealant from FLUIDFILM. Of course, all parts were fitted by SIP in matt silver.

Visually, everything was now as Alex had imagined and the lady now also had an engine and a chassis that would significantly improve the driving pleasure. But there was still something missing ... 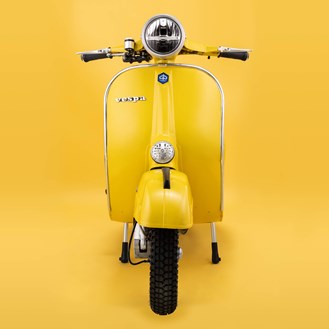 Let there be light and there was light.

The new headlight with SIP LED was framed with the CNC-milled lamp ring. The turn signals came from MOTOGADGET. To integrate both perfectly into the vehicle, a special SIP wiring harness was developed and installed. At the same time, the system was converted to 12 volts DC and a battery was installed. The control unit of the SIP speedometer and all the necessary electronic components were integrated almost invisibly next to the battery under the spare wheel.

Alex also decided to add a SIP rev counter and in general it should be noted that the assembly should look perfect. So original slotted screws were used wherever necessary.

Actually the VESPA was ready.

In 2020, another small update for the engine was on the agenda. Alex exchanged the VESPATRONIC ignition for the SIP PERFORMANCE ignition. And the exhaust was also replaced by the SIP Road 3.0. But then the Rally 200 was ready for action and has since more than proved its worth on many rides and tours. The Rally has real power from the bottom up and is not designed for peak performance. There are seven years, two children and a SIP move between building the engine and the first time on the road. A lot has happened in terms of parts. The next time the engine is opened, I'm sure one of the smooth-running SIP long-stroke shafts will go in. Let's see, maybe a QUATTRINI too. Ride On!

More information, exploded views and a parts list can be found on the special page for this Vespa Rally.

Do you like Alex's Vespa? We have produced a beautiful DIN A1 poster of the Vespa Rally on high-quality paper. And a DIN A6 postcard, for the fridge, the workshop or the living room - whatever you like. 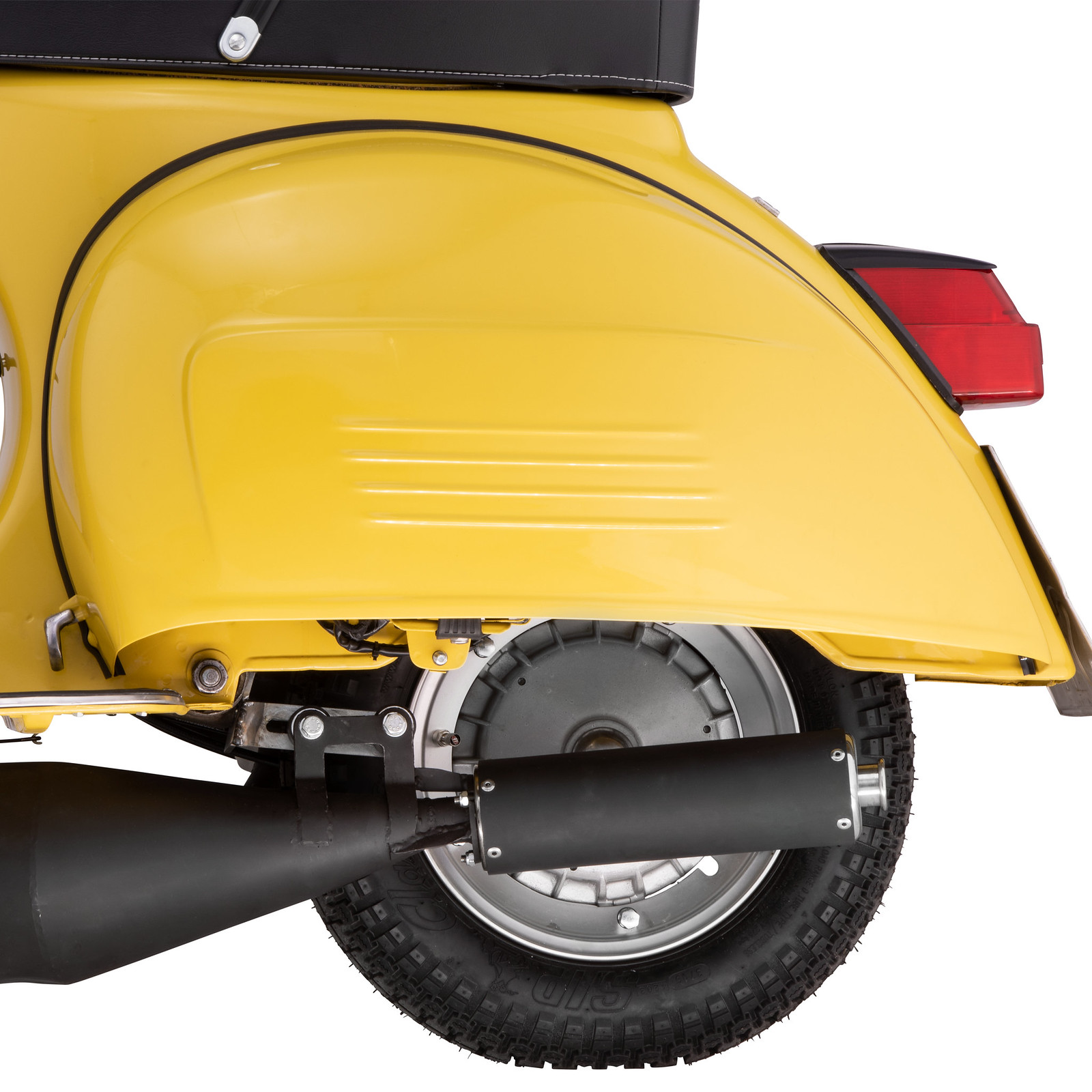