"Once upon a time in Vespa occupied Europe ..." - If Quentin Tarantino were to build a custom, it would have to be called "Glorious Basterd". But since he has neither the time nor the know-how, we at SIP Scootershop had to do it for him.

It had been a long time since a new Vespa Streetracer had left the SIP Scootershop forge. In recent years, a number of vintage projects have been completed. Most of them were based on the idea of getting road-tuned PX200 engines and appropriate chassis modifications to make long-distance and everyday vintage scooters. These scooters were mostly SS180s, GS160s, GS3s or VBBs.

But a beautiful old-timer doesn't knock many off their stool ...

SIP Scootershop only built extreme custom scooters for the 50 cc scooter scene. Since the heart of almost all SIPers is made of sheet metal, the car park in front of the shop looks like a small Vespa meeting in summer and the SIP company outing goes every year over the Alps to Italian or French meetings - only Vespa, without an accompanying vehicle - it was simply time to build a classic custom again.

The basis for the frame is a Vespa VNB. The 8-inch Vespas are still the easiest to get on the markets. Robert from SIP Scootershop likes pimped VBBs and had a completely finished frame lying around. It was then rebuilt by an old coachbuilder according to the model of the Vespa Sei Giorni. The leg panel was pulled inwards, slightly narrowed and the seams tinned.

Olli from SIP was building a Sei Giorni replica at the time and these elements had to be taken over. So that the Vespa doesn't look naked at the front, a luggage compartment was adapted to the Rally and slightly narrowed. Here there is room for the ABM brake master cylinder for the foot brake, as well as lunch and 2T oil. The expansion tank has also been integrated. SIP-Winnie rides a Sprint Veloce in everyday life and likes thick rally handlebars. The rest didn't want them, so the Rally luggage compartment was adapted and narrowed for him.

The trapezoid handlebars came from the Indian Bajaj Sprint - cheap and easy to get. It perfectly matched the chunky appearance of the scooter. SIP Alex is an SS180 fan, so the trapezoid handlebars were a must. The handlebar was then converted to a PV speedometer to make room for the new SIP rev counter. Visually, the rev counter can hardly be distinguished from a speedometer. Nevertheless, the analogue display is not km/h, but 100 x rpm. The digital display shows speed in mph or km/h, rpm, as well as water/head temperature, trip kilometres, and much more. The little marvel comes from Koso and was developed with SIP for two years.

The handlebars were also dropped - no street racer without a drop bar - and supplemented with the new SIP master cylinder. This master cylinder was developed together with MMW. It fits all Vespa 98 mounts, is not ugly black, but polished aluminium and tilted forward, as you know it from motorbikes. This makes braking more relaxed ;-)

In the "SIP Vintage" series, oldie parts for GS150, GS160 and lamp below were produced in very good quality by a small sheet metal forge. They stand out from the crowd due to perfect workmanship and attention to detail. Therefore the "Basterd" was equipped with GS160 side covers - the favourite scooter of SIP Ralf. These fit very nicely on the VNB frame, especially since the chassis has been converted to 12 inches and is already quite massive.

The idea for the 12 inch conversion came from Moritz. As a SIP ambassador he visited the US scene in California in summer 2009 and saw such a conversion there. The rims are from the Vespa GTS300 - Walter's favourite scooter. The brake drum was modified and appropriate mounts were created.

The "Glorious Basterd" from the side with open bonnet.

Another tribute to our Modern Vespa riders at SIP was the frame flap of the Vespa ET2, which, similar to the lamp, was fitted at the bottom of the centre bar. You can't get to the carburettor here, but there is room for the battery that powers the parking lights and LED lighting. Some at SIP are LED fixed. Benni, for example, converted the tail light of the Vespa '51 V30 and the trapezoid headlight to LED technology. This has become so popular that SIP has cranked up series production.

Another custom-made product that will go into series production is the new SIP Vintage Vespa seat. SIP has become big with GRP parts, so it was time to also produce a SIP seat for the oldies. Peter came up with the idea of the shape, based on old 60s motorbikes. Wiese and Dennie from SIP spent nights playing with clay, stencils and GRP to pick up the right lines of the VNB frame and then finish it in fibreglass. Perfect work.

Matt Black brings you Back - should not be the motto, although that was the colour suggestion from SIP Joscha. So airbrush legend Markus "The Intouchable" Pfeil was enlisted for the paint job.

The colours and racing paintwork of the 60s were the inspiration here. Elements of the custom paintwork were also to be integrated. A mixture of racing paint and custom paint, only interpreted in a somewhat modern way. Typical Basterd. Lada green, black lines, similar to the 70s rally BMWs, and white. The paintwork runs asymmetrically over the scooter like a 70s wallpaper and in terms of colour is also reminiscent of the Zirri Sprinters of the early 80s. Golden Ghost 10s shine through the countless layers of clear varnish at certain angles and stand for the Year of the Basterd 2010. Orange sharpeners and "Glourious Basterd" lettering are reminiscent of the Quentin film. Although it was a gruelling job for Pfeili, he too is more than satisfied with the result: "Not a racing paint job in the usual style, also cracking colours, the whole scooter rocks!"

More information, exploded views and a parts list can be found on our special page for the "Glorious Basterd". 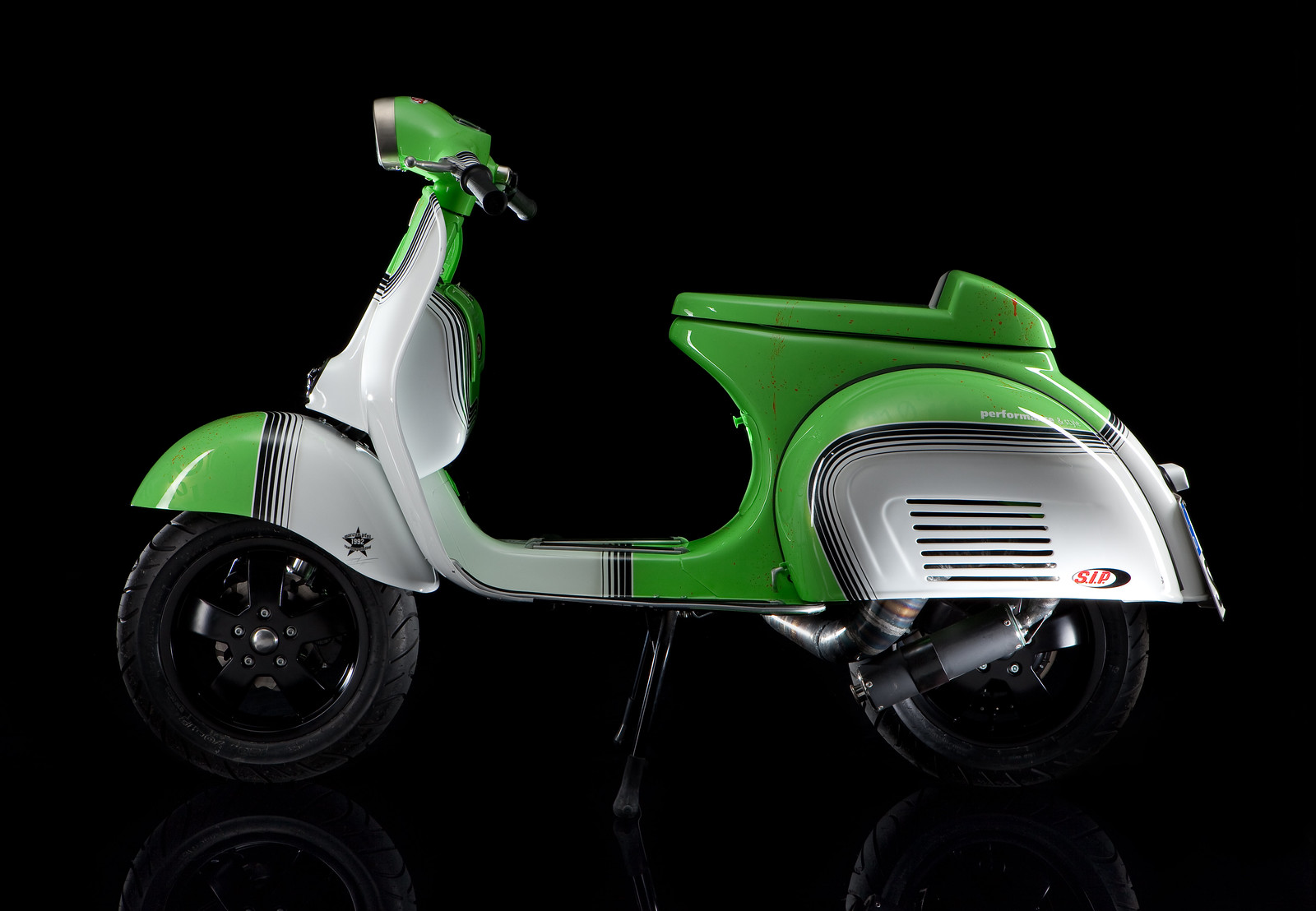