1991 was an interesting year: British computer scientist Tim Berners-Lee of the Swiss nuclear research center CERN publishes the first website, thus launching the World Wide Web. Ötzi is found in the South Tyrolean Alps. The Warsaw Pact is dissolved and, who doesn't remember, the multi-party system is introduced in the Seychelles. The whole year is accompanied in Germany by the number one hit of the Scorpions: "Wind of Change".

I myself had bought my first Vespa scooter a year earlier and decided in late summer that I would cut off my hair and become a "scooter boy". The youth subculture from GB wasn't as well known as some American influences at the time, but was gaining followers. The guys with their cut scooters, Domestos jeans, bomber jackets and bald heads with curls in front of their foreheads were a hundred times cooler than all American youth cultures combined. The center of the scene were the "runs" that took place all over Germany.

In 1991, this culture found popularity not only in Germany and I could hardly wait to visit a run with the scooter. About 1500 km away from where I lived at the time, in the south of France, a scooter club held its first meeting. More precisely, in the south-east of France, between the Alps and the Côte d'Azur, in the small town of Mormoiron.

The "Scooter Club du Sud Est" around their president Henri still exists. Luckily, because they are friends with Alex, Ralf and SIP Scootershop for more than two decades. They are also still active and organized a run in 2021 for the 30th anniversary of the meeting. The event is a highlight in the French calendar. Reason enough for SIP to make the annual tour to the friends in France.

We look forward to every tour, but the prospect of meeting our friends from the Scooter Club du Sud Est was something special. In gorgeous scenery under the sun of southern France, combined with a route that leads 80% through the highest and most beautiful Alpine regions. Past the Eiger, Mont Blanc and Lake Geneva.

Unfortunately, the weather threw a spanner in the works. For the outward journey only rain was announced. On the first day we got off lightly. On the highway towards the Alps everything stayed dry. However, we drove on the first pass stage only on wet roads and in its intensity changing drizzle. We had to cancel the second pass stage altogether because we would have been caught in a thunderstorm at 2400 m altitude. Arriving in Grindelwald, Switzerland, in the evening, despite the rain and clouds, made up for a lot. The iconic Eiger, Mönch and Jungfrau mountains surround the town with a majestic backdrop. From the hotel room, a murmur of countless mountain streams could be heard from every direction, plunging hundreds of feet into the depths. For me as a flatlander / city dweller, even after four years in Bavaria, a goosebump experience.

In the morning of the second day it was quickly clear that we would not take off the rain suit the whole day. The stage led through the high alpine Switzerland and past Lake Geneva. Unfortunately, fog, rain and clouds were so dense that we could not see the mountains for the most part, but could only guess. All that could be seen of Lake Geneva was a section as large as the duck pond in my neighboring village. The biggest excitement was a breakdown in a seven kilometer long, two-lane highway tunnel without a hard shoulder. The nightmare on every scooter tour. I had connected a cable on the ignition of my scooter a little too quickly shortly before departure. Vibrations have led to the fact that about 500 m after entering the tunnel, the connection was canceled. Hectic repair while trucks with a half meter distance and about 90 km/h pass. Just as the scooter is running again, we get a visit from the Swiss police. The right lane has now red sign and we get an escort with blue lights on our own lane. Fortunately for us, the officers were very friendly. Still, an experience I would hate to repeat.

On the third day, the sun finally shines. We start in Grenoble for a short stage of about 200 km to our destination in Mormoiron. We ride through the foothills of the Alps. Easy mountain stretches under blue skies. Lunch in a small French village. At every break a concert of crickets. Slowly the tour becomes as we imagined it. In the afternoon we finally arrive at the run site. It is located at a lake. The organizers have set up a large outdoor bar and a stage. The highlight is a large dance floor made of laminate, also outdoors, and built just for the event. The meeting is already well attended, we buy a cold beer, the evening can begin.

Saturday is the fourth day of our tour and, as usual, the day when the program takes place at the scooter meeting. We use the morning to screw on the scooters and to fix the collected small problems of the outward journey. After lunch in the sun, at the fountain of a small historical market place, we go to the meeting. On the program is, of course, an Alldayer. Dealer booths and club displays are set up around the open-air counter. We from SIP Scootershop also have a booth and show our latest own products and chat with the many visitors. There is a custom show, a slow race, a band and a performance test stand. A nice, usual run afternoon - finally again!

We start off into the hills of Provence. Long curves with phenomenal views through wide, blooming lavender fields. Then the mountains get higher again. The last section before our stage destination Briancon in the French High Alps. We cross a pass, the Col d'Izoard, at 2400 meters above sea level. Unusually, the road is perfect at this altitude. New asphalt, breathtaking views and sunshine. The most beautiful stage on the Tour so far and just ridden by the Tour de France. We enter Briancon. At a traffic circle, within sight of the hotel, the prospect of a cold beer makes me lose focus. In an impressively uncoordinated move, I first shift gears and then frantically mix up the sequence of clutch, gearshift and gas. A harsh noise and I know immediately that my transmission is dead. 7:30 p.m., the next spare part is four hours one-way away. Good night ...

The penultimate stage, the sixth day, leads through Italy to Lake Lugano. My day begins with endless phone calls to the French representative of my automobile club. The night before we went through all the options and it became clear: Even if I get the transmission and can change it on the spot, we'll be busy with it all day and won't be able to start on the long stage until the evening. I ask the group to continue and put my fate in the hands of bored foreign language students on the breakdown hotline. To make a long story short: towards the evening I am still sitting in Briancon. In the Whatsapp group of my fellow travellers the first pictures of Lago Lugano pop up. The guys are just coming out of the water in the sun and hold an ice-cold Spritz in their hands. Only the mountains in the background I have here also. In the meantime I am informed that there is no rental car within a radius of 100 km and the train connections from the town are fully booked. Otherwise my automobile club wishes me good luck. My girlfriend just picks me up quickly with our minibus. At 5 o'clock in the morning we arrive at home. We learned a lot about Switzerland. For example, that you can't get vignettes at most border crossings after 8 p.m. and that all gas stations are closed at night.

Easy way home thanks to a welding machine

The last day of the tour begins for me at 2 p.m., at home in my own bed. The tour group has of course long since been on the road. One last Alpine pass in Switzerland. A piece of the picturesque Lechtal and the Arlbergpass, which leads through Austria and thus through the fifth country on the tour. Unfortunately, there is also a defect. Alex spontaneously needs a welder. The group is lucky. Behind a door on the highway is an industrial area with garages. Immediately the first mechanic is enthusiastic about the Vespa scooters and helps. After about 30 minutes the journey can continue. In the early evening the group reaches Landsberg.

The SIP Tour 2021 was again an experience. Even if the weather was initially not on our side and I could not finish a tour for the first time. What remains are impressions of the ride through the Swiss and French high Alps. The lavender fields of Provence and the small towns in the middle of the vineyards. The best thing about the tour: the destination was a scooter meeting.

30 years ago I could not be present at the first meeting in Mormoiron. Now that I've had the honor of getting to know the meeting and the French scene, I know what I missed. A well organized and fun run. Beautiful and fancy scooters. The tour to this area is always a dream. All in all one of the most attractive meetings in Europe. The most important thing is the people: open, friendly and interesting. They tick like we did when we decided back then to combine our lifestyle with the scooter. I can hardly wait for a reunion.

Picture Gallery of the SIP Tour 2021: 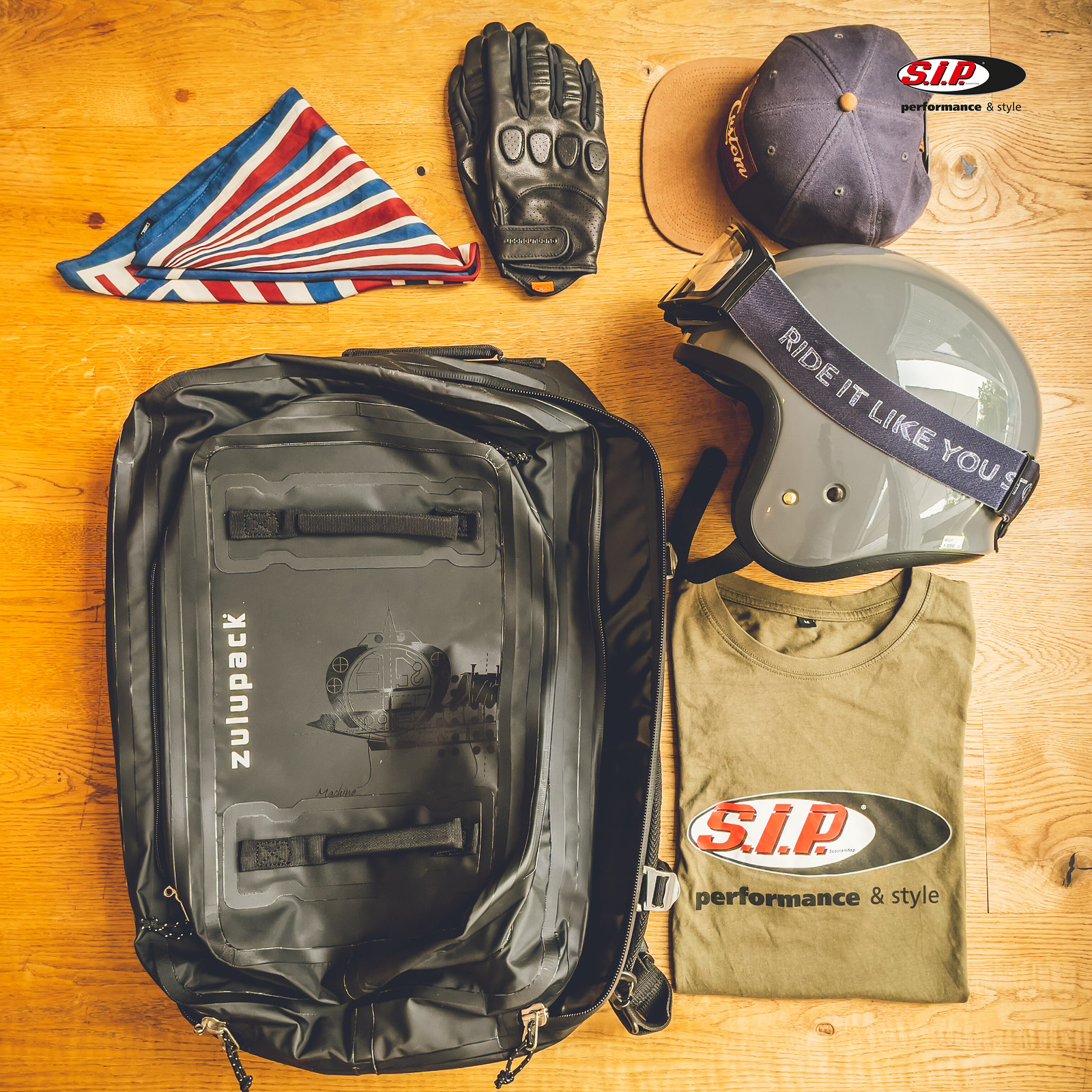