From the outset, the predictions were not exactly rosy. Regardless of this, we seven intrepid Vespisti carried on. At eight o'clock on a September morning, we started out in a southerly direction, under foreboding skies and their potential contents. We had planned to first reach the 'Weissensee' before nightfall, with the ultimate destination being the 'CroVespa 2014' rally, organised by our friends from the Rijeka Vespa club, taking place in Opatija.

Our waterproof clothing became almost immediately necessary in the Ziller valley and from then on it felt as though we were pushing the rain front along before us. Every time we stopped for an invigorating cappuccino, the sun put his hat on and lifted our spirits sufficiently for more of the same. Once we had reached Weissensee we decided that, due to our long-established habit of never pre-booking, we should push on towards Villach with more choice of temporary abode. We were heartily welcomed at the 'Goldenen Lamm' hotel and after a soul-warming shower we celebrated our hitherto efforts with much ‘Schnitzel’ and roast chicken in the hotels very own brewery!

The next morning, following a continental breakfast and the worst coffee in the world (!) we travelled on over the Slovenian 'Wurzenpass' along with the 'Vrsicpass' near Trieste, the birthplace of the espresso coffee. Being noticeably in need of at least a snickers (please see TV ad for details) I gladly took part in the seemingly never-ending trek through the drizzle, in a case of the blind leading the blind. Our quest included finding 'The best pizza in town', according to the helpful 'TripAdvisor' app tip. And then finally, BINGO! We were not disappointed.

This Friaulistic coastal town was kissed awake by the, already sorely missed, sun and we resumed our journey fully attired in our TUCANO URBANO waterproof outfits due to the almost inescapable rain....at first acceptable, later (as we had come to expect) domestic pets. The first groans of drowning from certain members of the crew were successfully ignored and we ploughed collectively on over small, badly maintained Slovenian roads, constantly surprising us with blind curves and dark unmarked bends. Buzet arrived through the night and we rewarded ourselves with piled plates of pasta with truffles! To motivate myself, I remembered how beautiful this stretch of coastal road can be on a Vespa, if the sun is shining that is...The remaining journey towards Opatija continued as we had come to expect on this trip, through the rain! A somewhat desolate behaving Croatian customs officer, who had very obviously already commenced with his daily ration of Slibowitz, showed us the way we thought we had lost. The greater the relief then as we, completely soaked, reached the already booked hotel in Buzet and undertook a collective bee-line for the wellness and sauna area.

The skies simply refused to brighten up but the hotels own one-man-show played dutifully on, with his Hammond organ and entertained our group along with an estimated 1.000 years of collective age distributed upon varies sofas and couches around the room. Outside remained dark and wet. We attended the CroVespa welcome party, organised by the Rijeka Vespa Club and due to sods law allowing a breakdown-free journey here, now it was time for a pay-back! One of our scooters lost a tooth from its clutch cog so it was a case of out with the old and in with the new. Oil refilled, kicked twice. Brumm!

The constant consultation of all 'WeatherCheck' apps promised no improvement on the weather front and so we decided to leave the otherwise sun-blessed Adriatic coastline and shot back up past Trieste on the motorway towards the wonderful Lago di Garda. These high-speed capers presented us with our next mechanical challenge. A heat-seized piston, occurring under precarious circumstances, but the rider had his ride firmly under control. Pull the clutch, roll to a stop, change the piston, kickstart twice. Brumm! Not forgetting, under these circumstances and location, the finest cappuccino from the nearby Autogrill along with an expert audience to comment upon our efforts. The sun was waiting on our arrival in Garda and did not let us out of its sight for the whole two days we stayed.

The return route was already decided before we embarked upon it, and as with last year we followed the beautiful Sarn valley and went over the Penser mountain pass. Following Sterzing and Innsbruck we took a small detour through the charming Leutausch valley, through Garmisch-Partenkirchen and from Peiting back onto the B17, home to Landsberg am Lech.

Looking back it was damp, it was wet, it was good, definitely never boring and certainly never to be forgotten.

As we say in German 'Auf die Schnelle in die Pelle'!

Thanks to TUCANO URBANO, without your great gear we would have been lost! 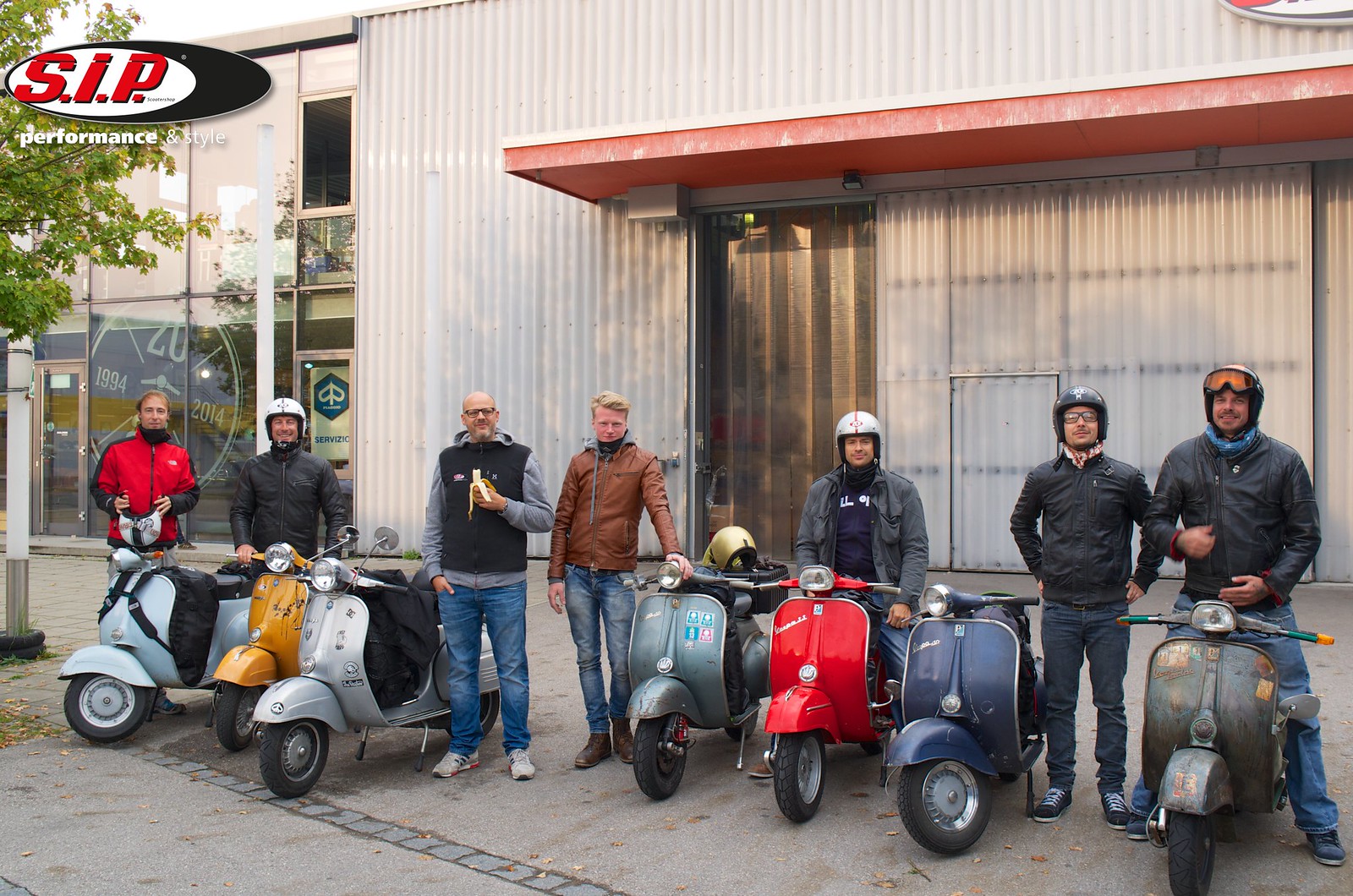