26 May 2022 - Once again, a Vespa Corso across Schwabing opened the 2022 Munich Vespa season. After the pandemic, it was a major showcase with almost 700 Vespas. In the previous year, 2021, the Vespa anniversary (75 years) had been celebrated with a colourful balloon parade on the street, now it was also a rattle for peace. Under the motto "The True Ascension", Pastor Friedemann Steck, logistically supported by Robert Balkau and the "Vespa Cowboys Munich", organised this corso for the 11th time since 2014. 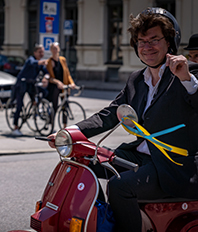 "Our European Vespa community is so large and widely networked in the direction of Eastern Europe," says Pastor Steck, "such a large Vespa meeting is also a rattle for Ukraine and a chance to show solidarity with the Vespa Club Ukraine in Kiev. It is also an opportunity to show solidarity: Vespa, created in 1946 from fighter pilots, stands for the long era of peace in Europe, which has now been cracked and cut. Vespa is not only a design icon of freedom - self-determination on two wheels - but also a symbol of peace. If you like, our rattling is always also a rattling where peace is violated."

At the beginning, a musician and a high school graduate from Kiev recited personal statements, the Italian jazz saxophonist Enrico Sartori, accompanied by the accordion orchestra Binario XI with Barbara Wolf, provided the Italian musical setting, and the organiser and Protestant pastor spoke entertaining and witty words of devotion. The young illustrator Lukas Wossagk, who now draws for the Munich Corso, had donated a humorous drawing in Tintin-style as a charity.

A big rattle for Ukraine

The route of the corso, which was escorted by the police, led along Munich's boulevard Leopoldstraße past the Siegestor to Odeonsplatz, where a big U-turn was made and the corso drove towards itself - a goosebump moment when "seeing and being seen" makes the heart of a Vespista beat faster. At the Siegestor, the route continued through the narrower street maze of Maxvorstadt into the museum district. The circumnavigation of Karolinenplatz with its Roman-looking obelisk in the middle was another highlight before the corso ended with an open finish in front of the Pinakothek der Moderne. A short but attractive city parade through Italy's northernmost city. A big rattle for Ukraine and for a blessed, peaceful Vespa season. 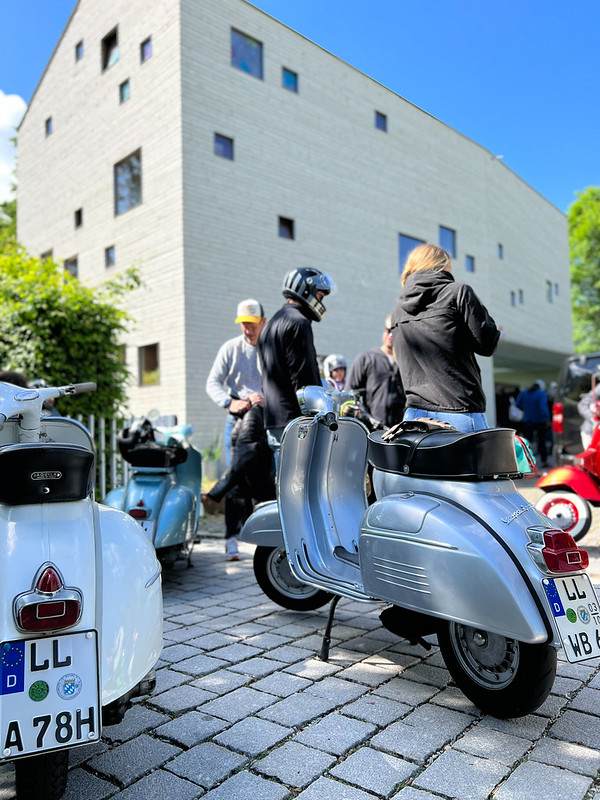 Friedemann Steck and his team collected 1,930 € in donations by selling lovingly designed stickers and pennants. We will donate this amount to a Vespa rider in Kiev who will use it to restore a Vespa PK together with friends and thus find a little everyday joy in the madness of war. We will report.