Vespa and Lambretta Down Under

Scooter Meccanica is Australia’s leading scooter specialist workshop in Sydney, and have been restoring and tuning vintage and modern Vespas and Lambrettas since 2005. Their new landmark workshop is a powerhouse of engineering, attention to detail, style, uniqueness, and brilliance. Supported and adhered by customers nationwide, Scooter Meccanica simply delivers unrivalled "exceptional service, custom dreams and speed machines". In fact, that’s the company motto. A motto proudly created and powered by its Owner and Founder, Sandy Symeonides. 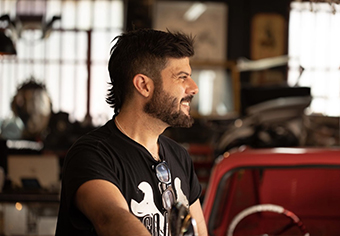 Sandy had always dreamed of creating an epic workshop and showroom to highlight the artistry and magnificence of the Vespa and Lambretta. With this vision in mind, Sandy has curated a new landmark workshop in the edgy industrial suburb of Alexandria, Sydney Australia.

Everywhere you look in the workshop, there is something special and authentic to admire. From the rows of SS180s, Vegas, a beautifully restored TV200, or to GS 150s and 160s, the space is as much an art gallery as it is a workshop. And the best vantage point? Sitting in the vintage leather sofa that Sandy inherited from his first Boss, Big Joe! Don’t forget to look up, there is a cathedral of Vespas and Lambrettas hanging from the original industrial ceiling, intermixed with chandeliers, motor antiques and plants.

The story begins in London

Sandy has been a loyal customer of SIP Scootershop since the late nineties. While he was living in East London, the SIP catalogue became his scooter bible, and he was one of the first to have purchased the famous SIP fiberglass race seat from Ralf and Alex. Back in the day, Sandy was focused on smallframe tuning under the inventive and genius eye of Trevor Howe, of Project 13 Racing. However, after returning to Australia, Sandy saw a potential and growth that was untapped. He recognised a gap in the Australian market and set about building a company known for creating world class custom builds and vintage Vespa and Lambretta restorations.

With his expert team behind him, including head restorer Mark, Sandy’s personal scooter collection and workmanship speaks for itself, he is most proud of his epic Nitros 1974 Vespa Sprint. Amongst his latest commissions, Scooter Meccanica this year has restored a string of Faro Bassos, SS90s and the stunning Lambretta TV175 series 1 (now owned by a world famous "Lambrettista"). Drawing to completion, is also a concourse 1961 Vespa 400, right-hand drive! Now that is something spectacular to check out, with only 80 built, it maybe one-of-a-handful in the world.

Since its opening, SIP Scootershop and Scooter Meccanica have partnered together to make Sandy’s dream a reality. SIP has always stood by Scooter Meccanica, through the highs and lows. Founded on respect and friendship, SIP always came up with the customer support needed to deliver custom jobs and nut-and-bolt restorations on time and budget. As Sandy confidently states: “SIP has offered Scooter Meccanica and the Australian market new opportunities not only to maintain their classic and modern scooters, but they are the paragon at providing the ability to get the best quality of parts to Australia in under three days. This enables me and my team, the peace of mind, not only to keep them all running but have them all back safely and reliable on our gruelling Aussie roads. What more could I, or the Australian market, ask for!?" 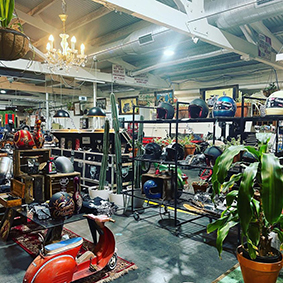 Sandy has seen the scooter scene flourish and grow in Australia over the last 20 years. And this is no accident (excuse the pun!). Sandy is a zealous enthusiast who lives and breathes to produce fast, reliable and meticulously restored scooters. He is an active member of the Australian scooter scene and President of the Lambretta Club of Australia. Riding across different parts of Australia, in the Classic Scooter Mille every year on his 1963 Vespa GS160, with head restorer Mark, and his partner Fleur, remains one of his best memories. In his spare time, Sandy champions causes including the inaugural White Ribbon Ride Out to stop violence against women and violence in all its forms, he has been an ambassador for the Distinguished Gentleman’s Ride, as well as providing a soup kitchen to feed the less fortunate in Sydney. He also employs and trains political asylum seekers, giving them work opportunities for further employment.

New records with the Lambretta? 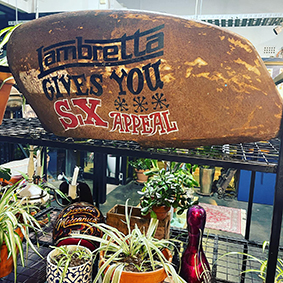 Over the Christmas holidays, Scooter Meccanica has not rested. The team has been building its "Salt Lake Racer", and through their discipline, inventiveness, and creative engineering skills they are confident in breaking the land speed record for the "modified streamline, 250cc category" on their classic Lambretta. The event will be held at Speed Week, Lake Gairdner; Australia’s version of Bonneville. If that is not enough, watch out for their vintage motor conversions and they soon hope to have the first prototype launched in the year to come. We are told that once again it has broken the mould of performance, range, and engineering, setting the benchmark of any future development, and placing Scooter Meccanica at the forefront of scootering.

Scooter Meccanica, with the support of SIP, has also developed a limited line of apparel which celebrates the enduring partnership between SIP and Scooter Meccanica. Check out their website for these upcoming collections and buy some merch online.

The new workshop is not just a place to get your scooter restored. It is a space for all scooter riders, from all denominations and clubs to meet, have a laugh, and ride together. As their motto states, Scooter Meccanica "specialises in exceptional service, custom dreams and speed machines".

So, if you need first class service and workmanship, or even to just inject some art and fun into your life, make a visit to Scooter Meccanica. You don’t need to take our word for it, just check out their world class builds, loyal customer base and global following. 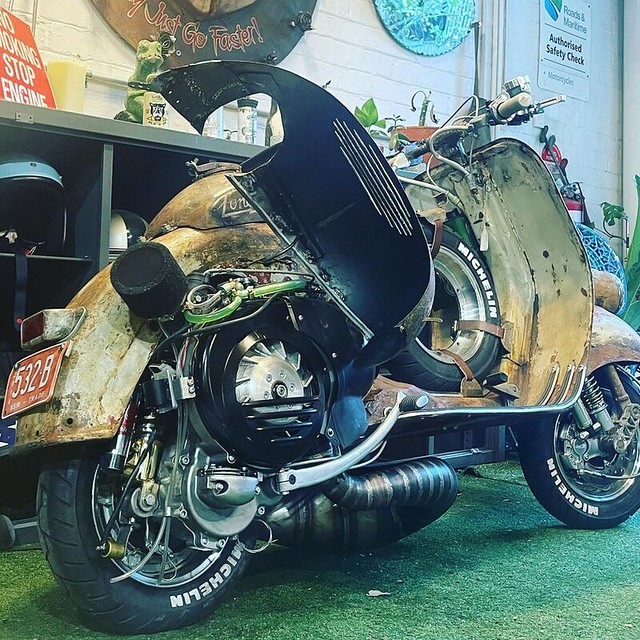