The world's first motorcycle from Landsberg am Lech?

If you mention the small town of Landsberg am Lech in a conversation, most people only know the prison where such prominent delinquents as Adolf Hitler, Rudolf Heß, Michael Graeter, Karl-Heinz Wildmoser junior and Uli Hoeneß served their sentences for various reasons. Yet the large district town has much more to offer: the historic old town with the town hall worth seeing and the former Ursuline convent. The city gates, the four-tiered Lech weir, the Mutterturm (mother tower) and up on the "hill" the former buildings of the Jesuits watch over the approximately 30,000 inhabitants.

But even among them, only a few know that the world's first motorized two-wheeler for series production was invented in Landsberg. And what did the Landsberg inventor call his invention, which was patented in Munich in 1894? Exactly: the term "motorcycle" was born! From Landsberg, a triumphal procession around the world began, and with the founding of the SIP Scootershop, a circle was closed, so to speak. But to tell the story of the ingenious inventor and the motorcycle, we first have to go in search of clues in our little town.

On a discovery tour in Landsberg

For only those who stroll very attentively through the historic old town and let their eyes wander over the walls in Herzog-Ernst-Strasse will discover a small plaque at house number 179B that identifies this building as the birthplace of a certain Alois Wolfmüller. The man spent the time from April 22, 1864 to October 03, 1948 on this planet and was, according to the inscription, an aviation pioneer. The plaque does not provide any further information and the inclined visitor has to make his way to Kolpingstraße to uncover another secret of Mr. Wolfmüller. Here you can read that this son of the Lechstadt built the first motorcycle, which is unfortunately not quite correct.

Scholars argue about who deserves the honor of having launched the first motorized two-wheeler. Was it the Frenchmen Pierre Michaux and Louis-Guillaume Perreaux with their steam-powered bicycle of 1869? Or was it Gottlieb Daimler, who equipped a wooden two-wheeler with an internal combustion engine in 1885? The question cannot be answered unequivocally, but the fact is that Alois Wolfmüller from Landsberg am Lech, together with the brothers Heinrich and Wilhelm Hildebrand, and Hans Geisenhof, was issued Patent No. 78553 by the Imperial Patent Office on January 20, 1894. In this document the word "motorcycle" is mentioned for the first time. The gentlemen around Alois Wolfsmüller succeeded in bringing the first motorcycle to serial production and building it in larger quantities in their factory in Munich. The "Guinness Book of Records" confirmed this historical fact many years later. So that would be settled and sealed.

Today, SIP Scootershop successfully keeps the two-wheeler tradition alive in Landsberg am Lech by making Vespa and Lambretta riders from all over the world happy with scooter spare parts and accessories. A few kilometers away, the 3C-Carbon-Group has been mass-producing HOREX motorcycles since 2017 and is dedicated to the resurrection of this great German brand. So Landsberg am Lech is not just a place where mad dictators and football-crazy tax dodgers peered through barred windows, but the town where two-wheelers learned to walk. It was here that the "Hildebrand & Wolfmüller" motorcycle was born on the drawing board. From January 1894 to October 1895, between 800 and 2000 units (sources are uncertain) were built. Some even under license in France with the name "Pétrolette". But who was this Landsberger Alois Wolfmüller and how did he get the idea to equip a bicycle with a motor? 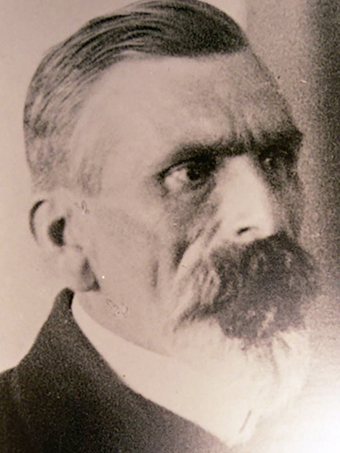 Above all, he was a brilliant student who mastered the Volksschule and Realschule in Landsberg with flying colors. According to Wikipedia, his teacher is said to have said the following sentence to him: "One day you will either become a big lump or something else really great." Well, as we know today, he decided against a career as a crook. Instead, he learned in his father's workshop and then went on the road through Germany as a mechanic and turner.

At this time, Heinrich Hildebrand (1855 to 1928) founded the magazine Radfahr-Humor und Radfahr-Chronik. Together with his brother, he developed an unsuccessful steam wheel, which, however, is now in the London Science Museum. In 1892, he commissioned Alois Wolfmüller to design a bicycle with a gasoline engine. In 1893, a first prototype, which can now be seen in the German Museum, rolled along the roads, which were still very bumpy at the time. During the test run, there were injuries, a mechanic lost an arm and Wolfmüller had to return to the workbench. The next test runs took place in Bamberg on January 18 and 19, 1894, but the motorcycle only moved backwards. It was not until the end of the month that Wolfmüller's friend and mechanic Hans Geisenhof rode 100 laps on Landsberger Allee in Munich. The patent finally refers to the two-wheeler with petroleum as a "motorcycle". On March 1, 1894, the "Hildebrand & Wolfmüller" went into production in Munich.

It was a water-cooled two-cylinder four-stroke engine. We quote from the documents of the German Museum: "Technically, the motorcycle is intelligently designed by Hildebrand and Wolfmüller and in some details ahead of its time. The heart of the design is an unsprung frame made of four horizontal steel tubes. The engine is suspended between these. Four tubes lead from the engine to the steering head. An advance over the previous two-wheeled designs by Daimler and Michaux or Perreaux was the pneumatic tires, which ensured a certain level of ride comfort despite the lack of suspension. The motorcycle, which weighed 60 kg and had a speed of almost 40 km/h, was braked by a block brake on the front wheel. Here, a brake shoe presses on the tread of the tire. This design is extremely wear-intensive and not very effective. The two-cylinder, four-stroke engine has a displacement of 1488 cc and produces 2.5 hp at 240 rpm. Ignition is via a glow-tube ignition system that was already obsolete at the time. The engine is water-cooled, but the water is not circulated by a pump - as is common today - but evaporates gradually through the engine heat. The water for this evaporative cooling is carried in the rear fender, which is designed as a reservoir." 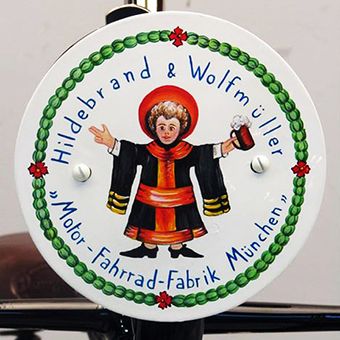 The young company "Hildebrand und Wolfmüller, Motor-Fahrrad-Fabrik München" is beating the advertising drum for its motorcycle and sends brochures all over the world. 850 workers create in the factories and between eight and ten machines leave the factory halls every day. For advertising purposes, Wolfmüller even took part in two races, finishing third in the Esperimento di corsa di veicoli automotori in Italy in 1895. There were four other participants, two of whom dropped out. The average speed was a rapid 15.5 km/h. He was unable to finish the Paris-Bordeaux-Paris race at all.

Disaster was brewing, as customers were unhappy with the motorcycle's life-threatening ignition and lack of reliability.  "Interesting as a toy, unsuitable as a means of transport," wrote a contemporary journalist, heralding the end of the "Hildebrand & Wolfmüller". Litigation for damages and overly expensive production put an end to the venture of the two pioneers. In October 1895, production came to an end and on November 2 of the same year, bankruptcy proceedings were opened. Today, around ten machines can be admired in museums all over the world and at auctions they fetch prices of over 100,000 euros. There are currently even replicas and a small series.

Alois Wolfmüller is described as a morose contemporary who had few friends and preferred to work alone. He did so from then on and devoted himself to his true passion: aviation. He made written contact with the pioneer of the skies at the time: Otto Lilienthal. A fruitful correspondence developed over many years. Alois Wolfmüller remained lonely and poor, but his designs and concepts have endured to this day. His flying machines can be seen at the Flugwerft Schleißheim and a branch of the Deutsches Museum.

In 1940, he tries unsuccessfully for the last time to apply for a patent. He lives with a certain Edmunde Schauberger in Oberstdorf - what role the lady played in his life has not been handed down. Alois Wolfmüller died in 1948, leaving behind no worldly goods apart from his manifold ideas and designs. The man who brought the motorcycle to series production could not profit from it materially.

At SIP Scootershop we occasionally think of this two-wheeled pioneer and consider ourselves lucky that we, quasi as his heirs, can be successful in Landsberg am Lech. After all, what is a Vespa but the Italian version of a dream that originated in the mind and workshop of Alois Wolfmüller and became reality for a few months in Munich factory halls?

And this dream lives on: Today, the "birthplace of the motorcycle" Landsberg am Lech is the navel of the world for many Vespa riders and enthusiasts. At SIP Scootershop we get visitors from literally all over the world and have made contacts from Argentina to Taiwan through the Vespas. And even the disgruntled Alois Wolfmüller would certainly have watched with shining eyes when up to 2,000 positively two-wheeled maniacs ride together, celebrate and talk shop at the SIP Open Day and Joyride. His inventions and ingenuity are the basis for the entire business field of SIP Scootershop and its more than one hundred employees. What once began as the project of a cranky tinkerer in Salzgasse 136 is attracting scooter riders to Landsberg am Lech more than 120 years later. Alois Wolfmüller may have died a poor man, but he made the world richer for motorcycle and scooter riders.