When water creatures dream of a Vespa ... 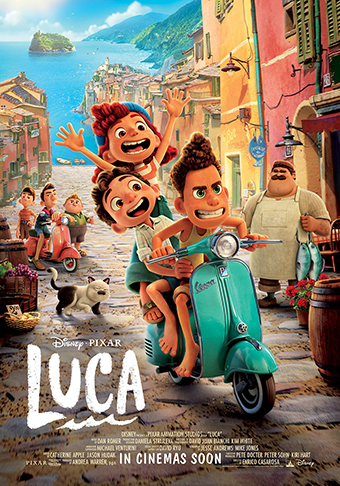 The new animated film "Luca" from the production company Pixar ("Monster Inc.", "Toy Story") is not in theaters, which have been allowed to reopen, but on the streaming service of the parent company: Disney+. That's a shame, because all people young and old should be able to see this adventure. Director Enrico Casarosa was born in Genoa and transports the attitude to life of his homeland with verve into his first long feature film. He stages the coastal town of Portorosso as a brightly colored reflection of Italian joie de vivre. Every cliché of the boot of Europe is lovingly quoted and, of course, one of Italy's most important cultural assets is not to be missed: Piaggio's Vespa.

But before the iconic two-wheeler makes its appearance, we meet Luca and Alberto, fishy water creatures who live off the coast of Portorosso in the salty water. Time and again they discover objects from the mainland on the seabed that inspire their dreams and fantasies. One day they dare to take the big step ashore and, as if evolution were running in fast motion, they transform from scaly fishlings to adolescent boys in seconds. As long as they do not come into contact with water, Luca and Alberto are not noticed, only then their origin becomes visible. Whether and when that happens is not to be revealed.

The object of their desire is a Vespa whose image they have seen on a poster. In their wild imaginings, they travel with the two-stroke to remote places, even into outer space. The fact that the village bully Ercole is already in possession of a fiery red machine from Piaggio only strengthens Luca and Alberto's ambition. But a Vespa costs money even in animated worlds, and they don't have it. So they build an extremely unusual custom Vespa from everyday objects, which looks cool but is only conditionally suitable for driving. Not a permanent solution - cash is needed. That's where the annual Portorosso Cup comes in, which is a triathlon of swimming, eating and cycling. With the help of the female sidekick Giulia, they take to the starting line ...

Of course, the children and residents of the coastal town are the protagonists of this enjoyable film for the whole family. But the Vespa plays an important supporting role as a symbol of departure, independence, freedom and adventure. And it's exactly this feeling and these longings that we share with these two guys.