The Vespa Gang in Boba Fett 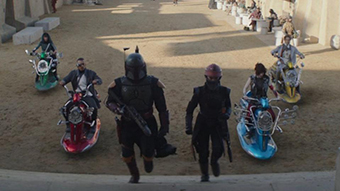 The third episode of "The Book of Boba Fett," the new series from the Star Wars universe, is making waves. Director and showrunner Robert Rodriguez ("Sin City") had a biker gang appear, fighting alongside bounty hunter and protagonist Boba Fett. And not all fans were thrilled by the fact that the bikers come along on colorful machines that are very reminiscent of Vespas from the 1950s. Co-star Ming-Na Wen told The Hollywood Reporter that it could be an homage to Star Wars creator George Lucas, who loves '60s mods and hot rods. Robert Rodriguez himself had hinted before the series began that there could be some elements in the show that fans might find controversial. For example, some viewers refer to the Biker Gang as "Power Rangers." Other die-hard Star Wars fans find the Vespas "too colorful" and "out of place" on the desert planet of Tatooine.

We think: Even on a desert planet, there can be young men and women who cultivate a rebellious lifestyle on their flying scooters, like Jimmy and his friends did in the iconic 1979 classic "Quadrophenia." And we're happy that Robert Rodriguez has reinforced and added a nuance to the Vespa myth, with her appearance in a "galaxy far, far away." And hardcore fans may please turn a blind eye and forgive us for finding "Yellowjacket" star Sophie Thatcher on a floating Vespa simply irresistible. The Star Wars universe will is big enough to survive this homage to the Italian cult two-wheeler.