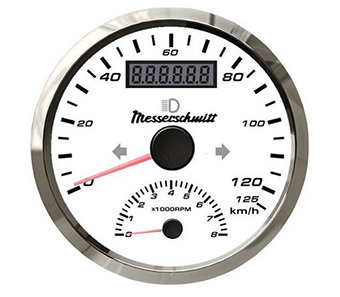 Most people first associate the name "Messerschmitt" with aircraft. And that's right, because here around the corner near SIP Scootershop, namely in Augsburg, the Bayerische Flugzeugwerke (BFW AG) was founded by Willy Messerschmitt in 1923. Legend has it that the aircraft designer was desperate to find an investor and almost gave up his patent rights to do so. Theo Croneiß, a fighter pilot in World War I, overheard the conversation between Messerschmitt and the financier in an inn. Spontaneously, he presented Messerschmitt with a check for 4,000 Reichsmarks and preserved his entrepreneurial sovereignty. The two became friends for life.

It was not until July 1938 that BFW AG became Messerschmitt AG with its main plant in Augsburg. Numerous aircraft models were used in the Second World War and Messerschmitt stood for innovation and progress. The Me 262 "Schwalbe" was the world's first series-produced aircraft with a jet engine, and the Me 163 "Komet" featured a rocket engine that was revolutionary at the time. After the war, Messerschmitt AG was banned from manufacturing aircraft, and the company's engineers were forced to rethink.

At that time, German designer Fritz Fend was working on a cabin scooter, which was produced in Rosenheim under the name "Fend Flitzer". However, demand was too great for Fend Kraftfahrzeug GmbH to handle, and in 1952 Fritz Fend turned to Willy Messerschmitt, whose production facilities were underutilized. An agreement was reached and in the spring of 1953 the KR 175 saw the light of day at the Geneva Motor Show. The Messerschmitt Kabinenroller was born.

In 1956, Messerschmitt was again allowed to build aircraft and production of the cabin scooter was taken over by Fahrzeug- und Maschinenbau Regensburg GmbH (FMR). Fritz Fend was a partner in the company. This was followed by the KR 200 model with a 10.2 hp engine, 191 cc displacement and a top speed of about 90 km/h. In 1964, production was discontinued for reasons of profitability. The Messerschmitt Kabinenroller became an object for enthusiasts and collectors or was completely forgotten ...

In 2013, Germany's Achim Adlfinger became aware of the Kabinenroller through an Internet message. The trained car mechanic from Neumarkt in the Upper Palatinate region of Germany taught himself design and mold making and was awarded the title of Germany's youngest car builder at the IAA in 1989 for a roadster he built himself. He fell in love with the Messerschmitt Kabinenroller, and in 2021 the KR-202 will be ready for series production with an electric drive or combustion engine. And even with a tubeless rim from SIP Scootershop, which we are mighty proud of. Designer Achim Adlfinger has lived and worked in Málaga, Spain, for 20 years and answered a few questions for us:

How did you come up with the idea of reviving the Kabinenroller as a velomobile in 2014 in the first place? Where does the passion for the Kabinenroller come from?
Adlfinger: "The Messerschmitt story started in 2013, when I first heard about the Messerschmitt Kabinenroller via an Internet blog and immediately fell in love with the ingenious concept that Fritz Fend and Professor Willy Messerschmitt had created. And from these contacts the 'Veloschmitt' was born first. A so-called velomobile with electric pedal assistance. After only four months of construction, the prototype was presented to the general public with great success at the Special Bicycle Fair in Germersheim on the Rhine in early May 2014."

So what about the Messerschmitt brand name? Did the license have to be purchased?
Adlfinger: "Shortly after the Special Bicycle Fair, an article appeared in the FAZ newspaper with the title 'The Messerschmitt is back!' Subsequently, after long tough preliminary negotiations and very skeptical behavior, the Messerschmitt Foundation got in touch immediately and finally granted me the license to use the name rights after all."

Initially, the KR-202 was only planned as a combustion engine. How was the idea received on the market? Does Messerschmitt have a firm fan base?
Adlfinger: "The combustion engine was intended to be a low-cost entry-level model. However, it very quickly became clear that the masses want to drive electrically. The few orders for a combustion engine come mainly from overseas. Yes, there are already fans, and the majority of our customers of course still know the traditional brand from the past or even had one or are now buying a new one to go with the 'old' one." 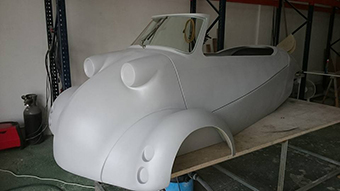 How has the whole project been financed for years? Are there investors or do you use private funds?
Adlfinger: "Due to negative experiences with partners in the past, I decided in 2020 to finance the project myself. In March 2020, just in time for the lockdown, I started the project and made the KR ready for series production with road approval in just twelve months."

How many KR 202s can you produce in a year? Are there any pre-orders?
Adlfinger: "We currently have just over twenty pre-orders, although almost no one has seen the vehicle live yet! And everyone is of course waiting for the hardtop version, which was only finished this week because there were problems with the suppliers. We will build about thirty vehicles this year. For next year, 100 are planned, plus, of course, the "Tiger" will be added ..."

We are of course pleased that a SIP rim will be fitted to the KR-202. Why did you choose our rim?
Adlfinger: "You simply have the largest selection and the rim has the perfect design for our Messerschmitt."

What kind of reactions do you get to the Messerschmitt Kabinenroller?
Adlfinger: "I had the most beautiful emotional experience in 2014 at the Intermot trade fair in Cologne. An 86-year-old visitor knelt down in front of the KR, stroked the headlight and said, 'That I may still experience this, that the KR will come back.' He had been a Messerschmitt dealer in Berlin in the 1950s."

Mr. Adlfinger, we wish you all the best for your project and will follow its development.

Information on specifications, prices, delivery dates and much more can be found on the Messerschmitt-Werke homepage.