When Tom Burick wrote to us and told us about his projects, we didn't have to think twice. His custom old and modern scooters with trailers are so cool that we absolutely have to show them to you. And of course, we wanted to know more about the person who creates these moving works of art. His latest project is a "Cabin Car Teardrop", which is a small trailer that he hooks up to his 1962 Vespa VBB and drives out into the wide world - for example, the Arizona desert. We asked Tom a few questions about his scooters and ideas.

Tom Burick - a man and his love for scooters

Tom, why don't you tell us a little bit about yourself? Where do you live and what do you do when you're not rebuilding scooters? 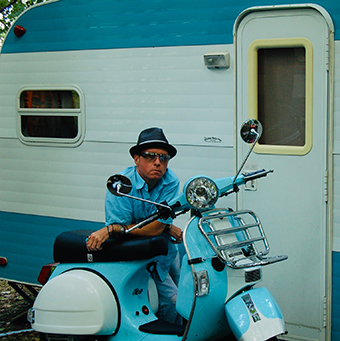 I am 52 years old but look younger and live in Mesa, Arizona. My main job is as a teacher. All my students are living with autism. The kids are great, and they teach me life lessons every day.
My prior career of 10 years was robotics. I founded a robotics company in 2000, secured several patents in my name and was able to deploy robots in 17 countries around the world. Mechanical engineering and metal fabrication are my passions in life, and I felt extremely fortunate that I was able to live my life's dream for a decade with the robot company. Scooters are an extension of that mechanical passion and I love to design and build over-the-top accessories for my bikes.

How did it start with the love for Vespa and other scooters?

Ever since I was a little boy, I always had a mini-bike, moped, or go-cart. I've always loved motorized vehicles. As an adult, I fell away from all of that. Too many responsibilities and too much stress. There was no time in my life for fun. After not taking a vacation for over five years, I went to the beach for the weekend back in 2002. I was walking around the beach town, and someone was renting 50cc Chinese scooters. On a whim I rented one for an hour. Within minutes, the stress of life fell off my back like cinder blocks. I felt so free. So happy. It reminded me of being a little boy again and going on mini-bike adventures. I was hooked. I went home and bought a brand-new Genuine Stella which as you know was an Indian made PX150 clone. Since that time, I have owned four Stellas, two PX150s, several modern Vespas, and currently own a 1962 VBB.

How did you come up with the idea for the camping scooter?

This little trailer started out as a quick weekend project for my students. I teach a camping club on Friday's, and I wanted to surprise my kids with a little foam trailer that they could climb around in, play with, and cook in the rear galley. The idea was to connect the trailer to the back of my 1962 Vespa VBB and roll up to the school playground as a surprise.

... with a little help from my friends

Tell us how the Cabin Car came about. Did you do everything on your own?

I have a lot of friends who are extremely talented and when I told them about the project, many of them jumped in to help. My Friend Jesse helped with the trailer frame. I was originally going to build the frame out of thin wood because the trailer was meant to be disposable ... nothing more than a temporary toy for the kids. Jesse is a metal guy like me, and it was easier, quicker, and lighter to build it out of scrap aluminum. We built the frame in about three days.
My friend Rob helped create the original CNC cut file to make the sides of the trailer. We modeled it after a vintage Cabin Car teardrop that I found on the internet. Our version is about 25% smaller than the original. Rob also cut the four acrylic windows for the trailer on his laser cutter. I purchased sheets of extruded foam from a hardware store and found a local business that graciously offered to CNC cut the foam at no charge.
I wanted to cover the little foam trailer in "poor man's fiberglass" because it's quick and cheap. PMF is nothing more than wood glue, canvas, and water-based latex paint. I had no experience with that so after a lengthy search on the Internet, I found Lucy, a local woodworker who was a master with PMF. I discovered her on a YouTube video and to my shock, we lived just nine minutes apart! Here's where a small miracle occurred, and the project went in a completely different direction.
Lucy and I started to assemble the little trailer and as soon as the assembly began, the trailer felt special. Really special. It was adorable and absurd. It was an enormous whimsical toy. The artists and craftspeople involved in this project were so talented that the construction of the trailer felt anything BUT disposable. It was lightweight at 170 pounds (77 kg) but extremely well built. As we were building it in Lucy's garage (with the garage door up a lot of the time) passersby on the sidewalk would stop and stare and ask lots of questions. They would smile deeply and genuinely as they looked at the little foam trailer. It made Lucy and me smile deeply in return. It was then I realized "This is SO MUCH MORE than a child's toy. This is a conduit of joy and human connection."
It was a connection that I had longed for most of my life. In a greater sense, I think it's a connection that we ALL long for. It was then I decided to share the little foam trailer with the entire world. I started a YouTube channel so everyone could share in the joy that this little refuge had to offer. I still plan on using it every Friday in my camping club. I'm sure the kids will love seeing it all over the internet!

How much has the build cost you so far?

As far as costs, I don't have a total just yet. I saved all the receipts and I'm doing a special YouTube video where I add up the costs for the first time. If I were to guess, I'd say maybe $1,500 in parts. As a side note, the original budget was set at $300. Haha.

What scooters do you ride besides the VBB and is there a club near you?

In addition to the 1962 VBB, I also have a 2008 Yamaha Morphous and a 2007 Yamaha Vino 125. The Morphous is 250cc so that's my highway bike for long journeys. The 2007 Yamaha Vino is a special build too. I love mid-century aesthetics, so I did a "fictitious build" and reworked the Vino into a 1950's scooter, complete with a little cargo trailer that I custom built. My dream job would be to work in a real fab shop where I could design and build over-the-top trailers and other custom products for vintage scooters. I've been obsessed with scooters for over 20 years and that's not going away anytime soon.
As for scooter clubs, I'm a very proud member of Sirens of Titan Scooter Club in Phoenix Arizona. We're a small club with just a few members but the friendship and comradery is priceless. We ride with a mix of vintage and modern and coffee shop hops are how we spend most weekends. Jason, the founder of the club, is also a camping guy so there's lots of scooter camping adventures in between. He's a wonderful guy and a great friend.

But the camping Vespa was not your first project. What else did you build?

I started building the scooter cargo trailers back in 2006. My first one was the red and white Vespa PX150 trailer. The design inspiration for the trailer was 1950's baby buggies, mid-century sci-fi rockets, and vintage motor bikes.
I didn't realize at the time but there was a psychological component to the cargo trailer build. My career was very stressful at the time, and I think I built that cargo trailer as a response to the stress. I would think about packing that little cargo trailer with some simple belongings to ride off into the sunset and never return. I loved the thought of that.
The cargo trailer was quite useful. I would take it to the grocery store, flea markets, all over town for errands. I liked it so much that I've built a cargo trailer for almost every bike I've owned.

The next cargo trailer I built was for my Honda Ruckus. I did it in a very rugged military style to match the rugged looks of the bike. Two weeks after completing that build, I rode the 50cc Ruckus and trailer over 7,000 miles across the United States and Mexico. Solo. It took me three months and was the adventure of a lifetime. That journey changed me.
A year or so later, I built the black cargo trailer for the black Honda Metropolitan. I pulled that trailer around clocking over 6,000 miles on that bike. That build might have been my favorite. The clean aesthetic and all black paint on the bike and trailer were beautiful. I got tons of compliments on that build.
The last cargo trailer build I did was for my 2007 Yamaha Vino 125. I think I built that trailer around 2017. I fully reworked the Vino 125 to look like a vintage scooter from the 50's. I did two-tone paint work, custom upholstery, and lots of chrome. Some of the chrome bits are from 1950's American cars that I found at swap meets. If you look closely, you'll see a paint matched German market BMW spare tire gas can mounted to the inside legshield of that bike.
I like my teaching job, but the big dream would be to build these cargo and camping trailers for a living. I feel like I'm just getting started and have a million more cool ideas.

What does a Vespa mean to you?

Timeless freedom. Riding a vintage Vespa lets me live in the past. I like that. The past has already happened, and we know the outcome. It's finite. It doesn't change. Allowing myself to be in that space gives me a tremendous sense of security. Also, I am an extremely mechanical guy and I LOVE how you have to engage a vintage Vespa. Turning on the fuel petcock, pulling out the choke, the manual transmission, the dual-drum brakes, the sound, and the smoke of the engine … it's a meditative experience for me every time I ride. It's all of that wrapped in glorious freedom. That's what Vespa means to me.
The world revolves around my bike. From the clothes I wear, to the friends I have, to the hobbies I pursue, It all centers around my bike.

Tom, thank you for your answers and we are looking forward to your next project, which we will be happy to report on again.

Now let's go with Tom into the Arizona desert. In addition, here is a video in which Tom prepares a delicious Thanksgiving dinner at his camper. Click the “CC” closed caption button for full text commentary in multiple languages (including German).

And of course many more photos of Tom, his friends and projects 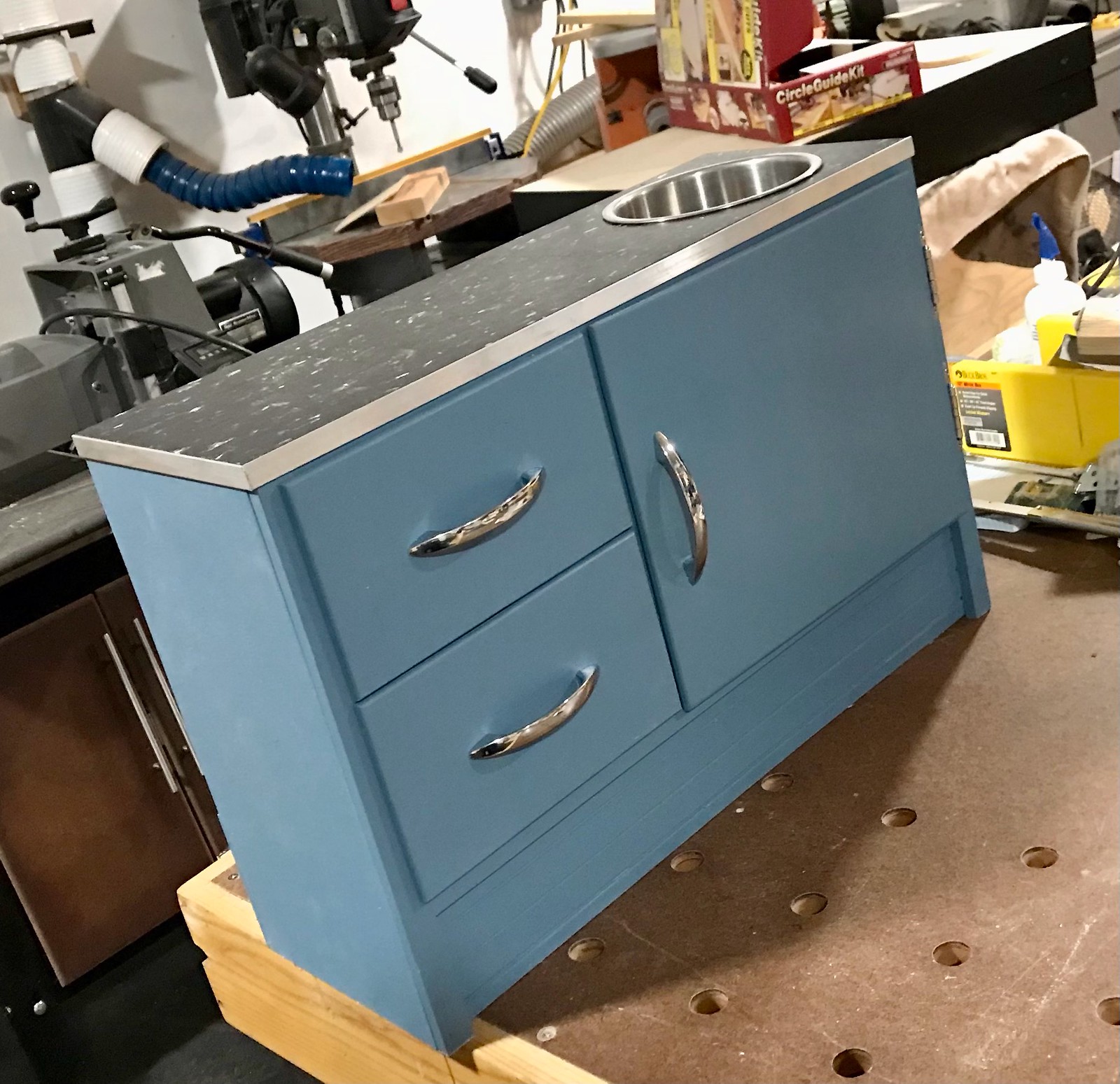