This year the Vespa turned 75 years old and the anniversary was celebrated extensively in many places and with some promotions. Piaggio itself brought the special models of the Vespa Primavera and Vespa GTS as limited editions on the market. Also in our store there are some products that were made especially for this occasion. From a jet helmet to a chic tin sign to a keychain - the range is diverse.

At the end of the year, we would like to look back at the beginnings of this Italian dream. How did the first Vespa come into being? How did the myth develop? What contributed to the worldwide success of this two-wheeler? To find out, we've tracked down some really old photos and advertisements from 1946 that document how the story began back then.

But first, let's take a look at the plain data sheet with facts and figures: 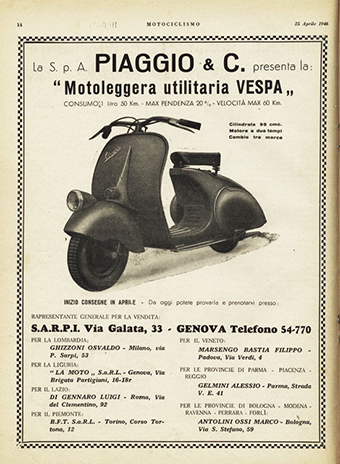 Prototype features: The inspiration for the design of the Vespa dates back to Pre-World War II Cushman scooters made in Nebraska, USA. These olive green scooters were in Italy in large numbers, ordered originally by Washington as field transport for the Paratroops and Marines. Motorcycle with bodywork fully enclosing the drivetrain and forming a tall splash guard at the front.
The MP5 "Paperino" prototype, in addition to the bodywork, included handlebar-mounted controls, forced air cooling, wheels of small diameter, and a tall central section that had to be straddled. A single-cylinder, two-stroke engine. Engine size: 98 cc. Continuous speed-variator gearbox. Chain transmission. Wheels: 4.00-10".
The MP6 prototype was presented in September 1945 to Enrico Piaggio, who exclaimed: «It looks like a wasp [Vespa]!». The absence of the engine cooling fan, the brake lever on the left side instead of the right, the horn under the saddle, the footboard’s aluminium laths, and the aeronautical symbol on the front shield are the most important differences between the MP6 and the future versions of the Vespa.

First model features: The motoleggera utilitaria Vespa, or light motorised runabout. The leg shield sported the new Piaggio logo, which replaced the former aeronautical emblem. 2-stroke single cylinder engine. Horizontal cast iron cylinder with press-fit light alloy head. Bore: 50 mm. Stroke: 50 mm. Capacity: 98 cc. Top speed: 60 km/h. Suspension: elastic, with spiral steel springs on the front wheel, and rubber buffers for the rear wheel and engine. Brakes: of the expansion type. Handbrake on the right side of the handlebar for the front wheel, and pedal on the right side of the floor for the rear wheel. Wheels: 3.50-8".

Interesting facts: The first 13 examples appeared in spring 1946; following its public debut at the Milan Fair, the first fifty sold slowly. With the introduction of payment by installments, sales took off.

19 million stories with the Vespa

Piaggio reports that over 19 million Vespas have been produced since 1946, almost two million of them in the last ten years alone. That's 19 million stories of people who, whether man or woman, young or old, rich or poor, have been able to experience a very special driving experience. "La Dolce Vita" on two wheels. 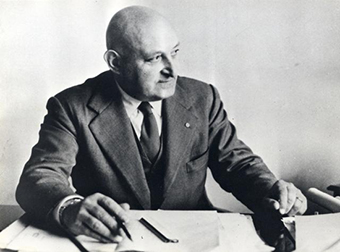 In 1949, designer Corradino D'Ascanio recalled his approach: "I thought the Vespa was for people like me, who had never been on a motorcycle and who shied away from the impracticalities of handling the machine. [...] The most important point was to make the vehicle look comfortable, as had been done with the ladies' bike. So basically I started from the concept of the ladies' bike. A reasonable and comfortable seating position seemed to me to be extremely important. Then it was a matter of making it as manageable as possible. It was necessary to keep in mind that the Vespa would be used primarily in city traffic. The hands had to stay on the handlebars at all times while driving. How could this be accomplished? Quite simply, by integrating the gear shift into the handle. Furthermore, hands and pants had to stay clean, which was not the case with the motorcycle and one of its biggest disadvantages. In short, I tried to design a vehicle that was as simple as possible. One of my maxims comes from old Henry Ford: 'What isn't there can't break!'"
(Source: Vespa - the official chronicle)

On April 23, 1946, Piaggio registered the patent in Florence. The first reactions were different after the official presentation. Great enthusiasm did not spread at first, but Enrico Piaggio nevertheless had 2,000 units produced and stirred the advertising drum.

With the support of Lancia's distribution network, Piaggio was able to steadily increase production. While in 1946 there were still 2,484 scooters, in the following year this became 10,535 and in 1948 19,822 units left the factory halls. The numbers rose rapidly and in 1953 Piaggio, together with the German licensee Hoffmann, produced 171,200 Vespas. The success was unstoppable and Enrico Piaggio had made Italy and many other parts of Europe mobile again after the war. 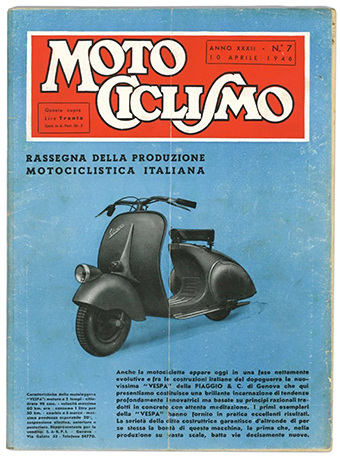 Italians' wallets were not exactly bulging in the years after the Second World War. How could people be persuaded to spend 55,000 lire on a two-wheeler whose qualities they had only heard about? Enrico Piaggio had a revolutionary idea: he introduced installment payments. The entire purchase price did not have to be paid directly, but could be "paid off" over the coming months. A convincing argument for people on a tight budget. But that wasn't all. There was a one-year warranty, free roadside assistance, theft insurance and registration. A package that convinced even the last doubter.

In addition, Vespa calendars came onto the market, which were soon hanging in many homes. Current stars from music and film served as testimonials. They conveyed confidence in the product and reflected the spirit of the times. Or they relied on lightly dressed ladies who presented themselves radiantly on a Vespa. The advertising campaigns contributed significantly to the cult status of the new means of transportation. It was about the embodiment of a new and light attitude to life, for which people were extremely receptive after the horrors of the war years. La Dolce Vita, a spirit of optimism and carefree fun.

Printed newspapers were the most important medium at the time, and Enrico Piaggio exploited this circumstance to his advantage. On April 10, 1946, the influential paper "Motocicilismo" wrote: "Practical testing gave more than satisfactory results. Both handling and roadholding are excellent, even on loose surfaces and dirty terrain. The suspension provides very good comfort. The front bulkhead, which does not yet have such features, could be fitted with hooks and eyes to which a bag could be attached for the purse and other things that you never know where to put on a motorcycle. On the whole, one gets the impression that the Vespa should be warmly received and very successful, also in view of the selling price, which, although it seems quite high in relation to the light weight of the vehicle, must be considered favorable in the context of current prices in our market and competitive in foreign markets." 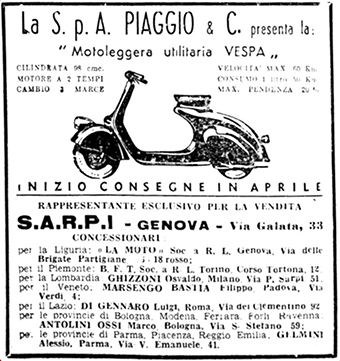 The feeling of exclusivity and belonging was reinforced by the emergence of Vespa Clubs. In 1952, the Vespa Club Germany was founded, in Switzerland they were already a year earlier at the start. Leader in Germany was a certain Mr. Jakob Oswald Hoffmann. Not without a certain self-interest, because the Hoffmann-Werke Lintorf was allowed to produce Vespas under license since 1950. Hoffmann brought the representatives of the regional clubs to the table and they founded the umbrella organization. Ernst-August Prinz zur Lippe became president. Vice president was the racing driver Fritz Huschke von Hanstein. And as distinguished as these names sound, the meetings were also held in those days: a suit and tie for the gentleman and an evening gown for the lady were obligatory. So it was not just about direct customer loyalty through membership of a club, but also about the feeling of being part of something special.

If you look around at the clubs' events and rallies today, people look a little different. But especially from England you hear stories that clothing should still follow certain rules and norms. The wardrobe has changed, but the attitude at some clubs has not.

The fact was that the clubs provided sales for Hoffmann and Piaggio. The Vespa myth grew continuously and found fans and customers worldwide.

For us at SIP Scootershop 75 years of VESPA are a real reason to celebrate and at the same time an obligation. All of us here feel connected to the myth of Vespa, our heart beats especially for the old scooters and their many great details. We would like to be able to offer you all important spare parts and of course accessories in the best quality, so that your sweetheart remains ready to ride. What could be better than roaring down a winding road on a Vespa and feeling the wind of freedom in your face? We wish you for the scooter season 2022 many such happy moments with and on our jubilarian!

If you want to learn more about the Vespa and the different models, we recommend our blogs and videos about the model:

Video: The Making of Vespa 75th