In May 2015, Juvena "The Wandering Wasp" Huang set out on a great adventure. She started out on her Vespa in her home country of Singapore with the simple goal of seeing the world. In the end, she rode 44,000 kilometers through 25 countries in 27 months: Malaysia, Thailand, Myanmar, India, Nepal, Pakistan, Iran, Armenia, Georgia, Turkey, Bulgaria, Macedonia, Serbia, Bosnia & Herzegovina, Croatia, Montenegro, Albania, Greece, Kosovo, Italy, Liechtenstein, Switzerland, Germany, Austria and the Czech Republic. On average, she rode 200 to 300 km a day and sat on the bench for six to eight hours. Her journey also took her to tranquil Landsberg and she visited us at SIP Scootershop. The contact never broke off and we asked how she sees her journey today and what plans she has for the future.

Please tell us something about yourself. Where do you live, what do you do for a living, how old are you?
Today I am 34 years old. I was born in and grew up in Singapore. Before leaving for my trip, I was a research assistant doing Aquaculture studies. Currently, I am a digital design and marketing trainee and also freelancer.

How did you get in touch with scooters in general?
The idea to get my motorcycle license and a scooter came about after travelling to Vietnam. The roads there were filled with scooters. It was a common and easy mode of transportation. I thought to myself how nice it would be to be able to travel and explore Vietnam on a scooter. After that, I enrolled to get my motorcycle license when I was 19 years old and bought a scooter for my 20th birthday.

How is the scooter scene in your country organized? Are you a member of a club?
There are a few scooter clubs in Singapore. It is quite small, not as big as those I had seen in other countries. Singapore is a small country after all. I am not a member of any clubs, but I did join the rides for a few clubs before. I mingle around with the motorcycling community in general rather than confine myself only to the scooter scene.

When did you start to plan your big adventure? Where did the idea come from?
A motorcycling buddy passed away in a traffic accident at age 29. He was driving a van when it happened, and he was not on a motorcycle. His passing made me realize the brevity and uncertainty of life. That made me rethink my priorities and goals for myself. I had always wanted to travel long-term after the trip to Vietnam. I did not have the courage to do it and play everything safe and comfortable. My friend’s death is the push to make me take the plunge and pursue the dream of travelling. And this time round, it is combined with my newfound love for riding.

Did you do smaller tours before you started the big one?
I started off with riding to neighbour country Malaysia often and then went further to Thailand with friends. Before the big trip, Thailand was the furthest I had ridden on my scooter.

What scooter did you use for the long trip and how did you prepare it?
Vespa Excel 150. It is very similar to the PX. I prepared luggage racks for it and also installed heated grip, the latter I removed because it was draining battery. I did not give my scooter engine a good check before leaving Singapore. My mechanic was not serious about my trip and thinks that overhauling a working scooter is wasting his time. In the end, I overhauled the scooter in Bangkok, Thailand.

What did you pack in your bags and what is essential for such a trip?
What is essential or not really depends on your travelling style. Sometimes you will only find out what is essential while travelling. I am a budget traveler, so I also packed in my camping gears to save on accommodation cost. I carried some spare parts and tools too. I have since learnt to be selective about the parts and tools because they can be heavy. I made the mistake of overpacking. Along the way, I ended up giving away things that I did not use. At the same time, I also added useful tools to my luggage like the locking pilers. It was so useful for adjusting clutch cable and removing tight screws on my own.

How often did you have to repair the scooter and what did break?
I can’t remember how often, and I cannot recall every single thing that broke. It was anything from broken mirror, scratched piston to handlebar lock (due to attempted theft). Most of the time they are minor issue. There were 4 occasions when my scooter cannot move at all and had to be towed to the mechanic.

As a woman alone on a Vespa

How did the many different people you met in many different countries react to you?
Sometimes, I got asked where my husband is, especially in countries where woman are usually accompanied by man. I would jokingly point at my scooter. Many people were surprised of a woman travelling alone, furthermore on a scooter. Overall, I encountered too many people who went all the way to make my stay pleasant and opened their homes to me.

Where you afraid in some situations?
I was the most afraid on the first day of setting off. There was so many unknowns and uncertainty in my mind. Many scenarios played out in my head. However, the more I travel, the more I understand the reality of the ground, the less afraid I become. My perspective shifted a lot and was able to look at situations rationally rather than emotionally. My scooter broke down in the middle of Baluchistan province, Pakistan, a region troubled by insurgency. In the past, there were kidnapping of foreigners and suicide bombings. I had officers with AK47s with me. Even so, I was still able to keep my calm. To be able to keep yourself level-headed and resilient is to accept the uncertainty as part and parcel. I had encountered and overcome so many problems before, each one is just another to solve. Being afraid will only hinder my thinking process.

Any problems at the borders? How many visas did you need?
I had some drama at the Indo-Pakistan border because I was crossing it with another German motorcycle traveler. That is an entire story by itself. I am very fortunate that I have the world’s most powerful passport. It is a privilege. Out of the 25 countries, I only had to apply visas for 7 of them. Some I had to apply in my residential country of Singapore. The rest, I applied along the way. It is important to research about each country’s visa requirement to ensure that the journey doesn’t face any hiccup.

How did you get in touch with SIP Scootershop back then?
Moritz reached out to me during the trip. He offered parts support should I need any. When I arrived in Serbia and decided to overhaul my scooter there, I contacted him. SIP decided to sponsor the parts. I am very appreciative. When I was near Germany, I reached out to Moritz again saying I would like to pay SIP a visit. Once there, he was so graceful to give me a tour of the place and also passed me more accessories. Not just that, SIP also put me up at a nearby hotel for a night with compliments. Later in the evening, he and Martin showed me around Landsberg. It was nice to stay in a hotel with comfort after a year plus of camping, hosteling and couchsurfing. I am super grateful to SIP for the support and hospitality. Thank you.
(Editor's note: At the time, we had given Juvena, among other things, a SIP Classic glovebox bag along the way. This bag was put through its paces on the trip and mastered all the rigors sovereignly, as can be read here).

What are your plans for the future?
My scooter is still in Czech Republic. I have deregistered it as a Singapore vehicle because there was change to the regulation. Old motorcycles have to be taken off the Singapore roads by 2028. It is not worth paying thousands to ship my scooter back to face a death sentence. I am looking to re-register my scooter in a European country so that I can resume my journey. It is quite a challenge because my scooter does not meet the Euro Emission Standards and yet it is not old enough to be registered as a vintage.
I am still looking at options at where I can keep it legally on the road and to ride it as a non-EU resident. Otherwise, I will probably donate it to a museum and buy a new scooter in Europe.
Due to the uncertainties caused by the pandemic, it is difficult to make concrete travel plans. I hope to return to Europe at the end of this year to sort everything out. There are still parts of Europe that I want to explore. On top of that, participating in the Mongol Rally in 2023 or 2024 is one plan.

Juvena, thank you for your answers and we look forward to your new adventures. Ride on!

More info about The Wandering Wasp can be found on her homepage and Facebook. 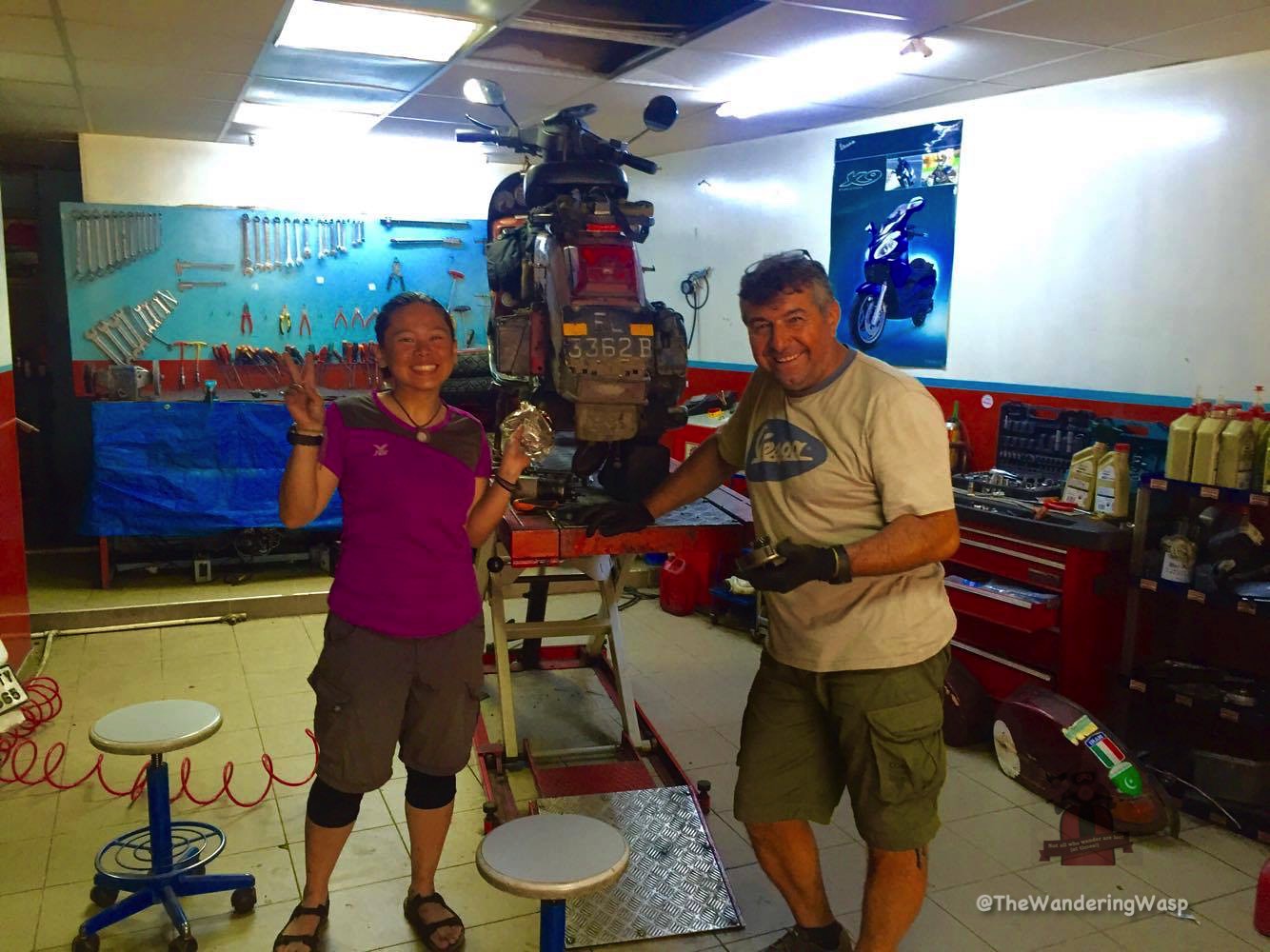 Video: 14 months on the Road - Adventures and Misadventures