“Performance and Style” are two terms of significance. Especially when they have been the firms motto for twenty-five years. When this firm is also celebrating its silver jubilee, then it becomes more than a duty, but also a leasure to bring this motto to life! To truly walk (or in this case ride) what we‘re talking!

In our encapsulated world of Vespa (and Lambretta) scooters there is only one effective method of realising this, with a really mind-blowing custom built vintage scooter! The initial idea was to unite custom and race scooter themes in one project. A scooter that not only gets noticed due to an extraordinary styling, but can also deliver an impressive performance on a race circuit.

Whether the result of our efforts will satisfy the high standards and expectations of this challenge remains to be seen. We have given it our best shot, to translate our ambitions into actual reality with a completely fresh approach to such a project.

The chassis has been extended to equal the wheelbase of a Lambretta. We have shortened the steering column by 10cm and lowered the rear of the frame by 8cm. The legshields have also been lowered and moved forward. The intention was to not only provide the frame with a unique and unusual look, but to also improve the overall stiffness. This modification made an extended Vespa frame possible, without the need for an extra central frame spar between the headset and the seat. To underline this new-found rigidity, we also welded steel-tubing within the chassis, which was also ideal for the routing of both the electrical and control cables through the frame. The fuel tank, relocated to the central footboard tunnel, has been permanently welded to the frame of the scooter at this point to provide additional stability.

Only one power-plant could be considered for the provision of adequate propulsion – our very own SIP-BFA 306 engine! This high-end miracle of vehicle engineering provides around 50PS straight out of the box. We left no stone unturned in our quest to create something just a little bit special and fully explore its explosive potential. It is currently pushing out 71PS, measured at the rear wheel! This power is transmitted to the riding surface with the assistance of an electrically operated sequential gear selector mechanism. The push of a button on the steering assembly is all that is required for rapid gear selection.

To set the scene surrounding this engineering wizardry a special paint job was also essential. The paintwork should not only reflect a show boat or race machine, but also represent its eye-catching old school influence and inspiration. In our collective opinion this can only be achieved with metal-flake, lots of metal-flake!

The gearing is based on a sequential Motorino Diavolo gear selector. This was modified and connected to an electric servo. The selector box is operated by two buttons on the handlebars

Cooling of the clutch:

The gear oil is sucked off at the bottom of the engine case and injected via a pump in the centre of the clutch. The pump is switched on when a gear is engaged. This helps cooling the clutch at the startlt

All items in a notepad here for easy browsing. 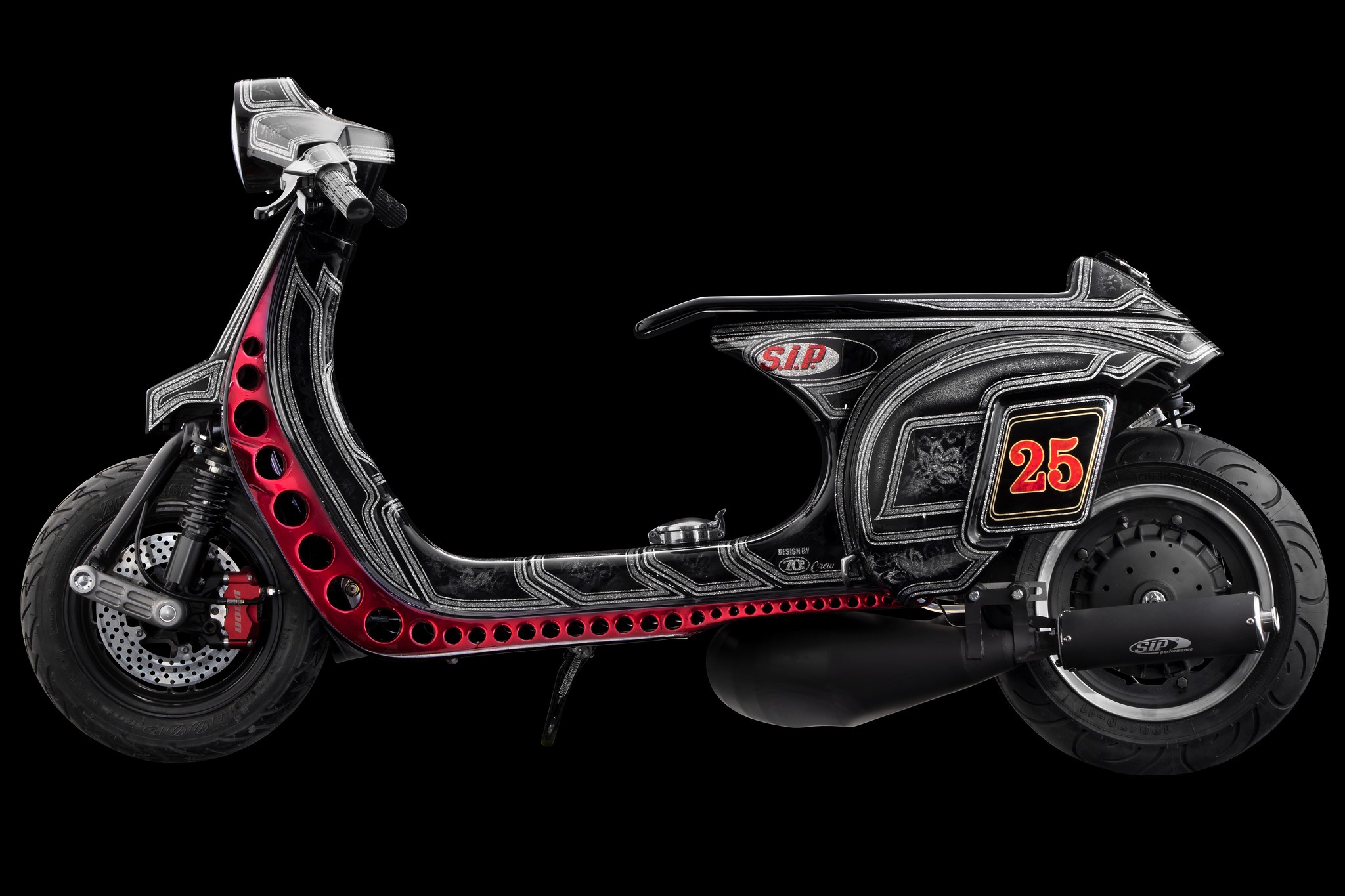