When it comes to organizing action sports events, Red Bull has managed to become the state of the art name in the business. The manufacturer of sweet fizzy drinks from Salzburg/Austria has recently become of Vespa as yet another action sport vehicle and thus advertised a brilliant competition: 200 Vespisti were able to register for this competition which was staged on the roof of the old FIAT factory located in the Torino district called Lingotto. This building is one huge industrial complex built in the 1920s which ranked among the most modern buildings in the world at that point. A massive ramp leads all the way up to the factory roof, consisting of 6 rounds and a length of approx 600m. The test and race track includes 2 parabolic curves and has an overall length of about 1km. Moreover, there is a conference room inside a huge glass dome as well as a heliport. The setting offers unequalled opportunities and was definitely worth of a James Bond movie. Moritz and Ralf from the SIP Scootershop Team already signed in for this event some weeks ago and were among the lucky ones to actually receive 2 of the coveted 200 participants’ tickets.

Michael and Hans from Copenhagen Scooter Club joined the parade as they happened to be on a visit in Landsberg at the right time. Lukas from the SIP TV Youtube Channel completed the group. After an extended tour of the local Torino Vespa and workshop scene on Saturday, time was up on Sunday morning: we were off to Lingotto! A ragtag crowd had already gathered there and there was the typical 2-stroke noise to be heard all around. Red Bull had decorated the premises nicely with tents, funny vehicles and beautiful promo girls. All participants had to pass 4 tests. The first test was the search for the most creative costume, the motto of this party was “Italian Style”. The jury had a good look at each scooter before casting their vote. The jury consisted of the winner of Italian Big Brother version Grande Fratello and other b-list celebrities that were unknown to us. We were already able to get an impression of the quality level of Italian television Friday night when we were sitting in the hotel bar. During prime time, some guys dressed up as Teletubbies dished out jokes. Well, at least our waiter seemed to enjoy the show…
After the costume show it was time for the second test: every participant had to dis- and reassemble the front wheel as quickly as possible. If you stayed below the time limit, you got bonus points, otherwise penalty points. Finally the tests got more suspenseful: we had to ride the 600m long ramp to the roof of the Lingotto in exactly 90 seconds. We have seen a couple of interesting special constructions of stop watches which were meant to help to reach this timeframe as closely as possible. However, most riders simply enjoyed the unique ride to the top as well as the approach to the race track on the roof – breathtaking! Once the rider had arrived there, Red Bull offered a tasty “Pranzo” including, of course, the sweet fizzy drink that lent its name to this event. All riders thus entered the last test well-prepared. Meanwhile, wheelie king Nicola Campobasso performed an awesome show which entralled the crowd. It is always incredible to see Nicola outsmart gravity to show astonishing acrobatics on a Vespa – bravissimo! The last test was passed by riding two laps on the race track in the same time or as closely as possible. If you did not take it too seriously, you could just enjoy the centrifugal forces at work during the parabolic curves, awesome.

All in all, it was really a great event of a different kind, organized by a brand that seem to be successful with all of their current projects, just take a look at the current standings in the Formula 1 world championships. We really hope that this was not a one-off event by Red Bull! We brought lots of pictures for you: 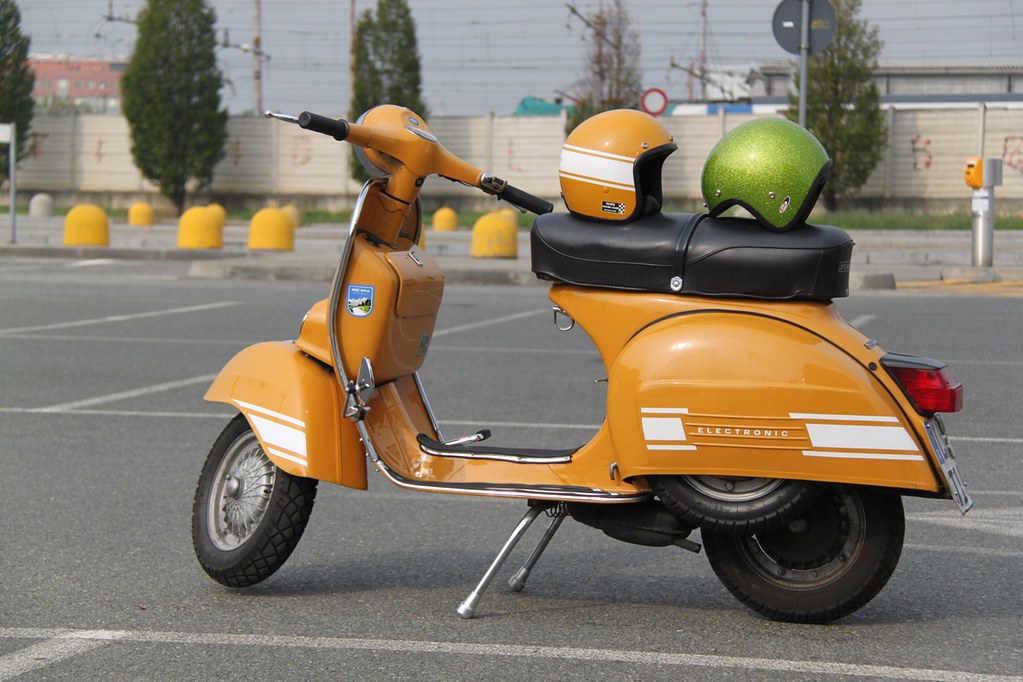