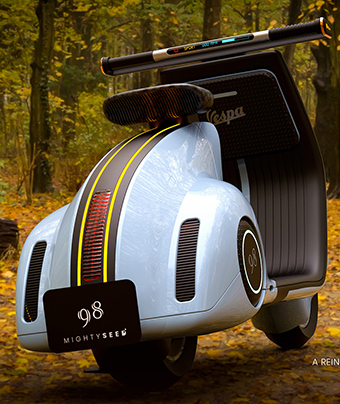 The designers of the company Mightyseed from Coimbatore, India, stand for innovative product and industrial design. From drills to medical devices to children's seats, the creative department has been designing visually, haptically and functionally impressive products for years. Last year, they took on a true Italian icon: the Vespa 98 from 1946 was brought into the new millennium. Of course, there's no longer a two-stroke rattling under the sheet metal fairing; instead, the engine draws its energy from a 30 Ah lithium-ion battery pack in the scooter's belly.

"A look back at history provides a better insight into the future," say Mightyseed's designers. And their idea of the reincarnation of the Vespa 98 may scare off a purist or two, but it's worth a closer look: the front end risks a bolder look than the original. As before, the headlight is mounted on the fender, but instead of "lamp below" it is now called "LED below". The Vesperisti looks in vain for a rearview mirror, this function is replaced by the Lidar (light detection and ranging) method: three-dimensional laser scanning detects all potential hazards and warns the driver via the display. The unique appearance is perfected by sweeping shapes and an angled tail light strip in combination with a turn signal unit.

Those who are now worried about the future of the beloved Vespa can rest assured: this is only a concept scooter that will never roll off the production line. But this fundamentally modified Vespa 98 would definitely be an eye-catcher at the next SIP Joyride.

Corradino D'Ascanio, who designed the original Vespa for Enrico Piaggio, doesn't have to turn in his grave and maybe he would have liked the design itself. We will never know ...